E1M9: Termination (M_VAD02+03.wad) is the ninth and boss map in episode The Remains of UAC of ZPack. It was designed by Björn Ostmann (Vader) and uses the music track "Caverns" by Marc Pullen (Fanatic) at the start and, for the boss fight, "Death Wind (Climax Remix)" by Jay Reichard (silentzorah) based on "Death Wind" from F-Zero, composed by Yumiko Kanki. The par time defined in MAPINFO is 4:00. Together with E1M8: Thunderpeak Powerplant, it was also given a standalone release in August 2008 as "Thunderpeak", and granted a Cacoward. 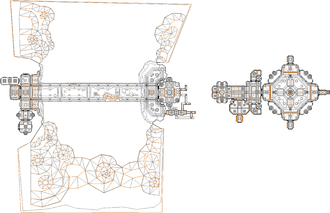 Map of Termination
Letters in italics refer to marked spots on the map. Sector, thing, and linedef numbers in boldface are secrets which count toward the end-of-level tally.

* The vertex count without the effect of node building is 16337.