E1M9: The Graveyard is the secret level in the City of the Damned episode of Heretic. It can be reached via a secret exit in E1M6: The Cathedral. 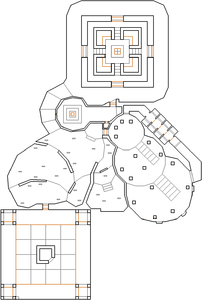 Map of The Graveyard
Letters in italics refer to marked spots on the map. Sector numbers in boldface are secrets which count toward the end-of-level tally.

This level contains a large number of ghost monsters, so it helps to know how to deal with them. The Ethereal Crossbow is less effective on ghosts and the Staff is completely useless.

From the start, head up the stairs and turn left. Walk into the open area and look to the left again to see a platform with a Dragon Claw. Go up the stairs to the platform and collect it. Now go across to the other side of the area and up the steps, where you will see a large grey building. Stay to the south of the building and locate a door carved with a skull and spinal column. Pass through and turn right to find the yellow key and a switch that lowers the Tome of Power. Taking the Tome of Power triggers an ambush. Backtrack to the open area and head north through the yellow door. In this area, several sections of the floor rise and fall erratically. In the southwest corner, locate the Gauntlets of the Necromancer and the switch that opens the central structure. Pull the switch and enter the structure to collect the green key, then backtrack to the green door. Pass through and head down the stairs. Locate the Ethereal Crossbow at the western end of the bottom floor, then pull the switch on the back of the southernmost pillar. Head back up the stairs and go through the passage that has opened. You will see the blue key ahead of you. Use caution as you approach, because you will be ambushed by ghosts. After collecting the blue key, return to the large building and enter. Head to the center and pull the switch on the western wall. The corners of the room will open and ghosts will come out. Enter any of the opened corners to temporarily lower the walls around the exit.