E2M10: The Fountain of Youth (Masters of Chaos)

This level occupies the map slot E2M10. For other maps which occupy this slot, see Category:E2M10.

E2M10: The Fountain of Youth is the tenth, and second secret, map in the Hellbound episode of Masters of Chaos. It was designed by Caleb26 and Doom_Warrior, and uses the music track from Heretic's E1M6: The Cathedral 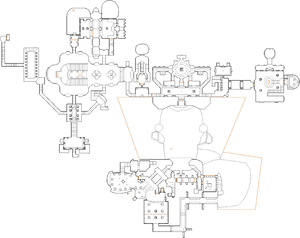 Map of The Fountain of Youth
Letters in italics refer to marked spots on the map. Sector, thing, and linedef numbers in boldface are secrets which count toward the end-of-level tally.

Take the Jade Wand and the Gauntlets of the Necromancer either side of you and go north-east down and up two sets of steps, watching out for nitrogolems and an ophidian on the way. When you reach a landing with undead warriors, turn right and go through a stone door. Slay the three fire gargoyles and go through the stone door behind them to find a passage with golems.

After slaying the golems, approach the wooden door behind them; alcoves on either side will open to release Butchers, ogre-like beasts that fight using their large hammers. Kill them all to open the wooden door and go through it, take the Silver Shield by the crates and go through the next door flanked by serpent torches. Kill the waiting Knight Archers and press the switch in the south-east corner to lower the barred windows - slay the ophidians that are released behind you and go through either window to get outside.

After landing in the water, go south and turn right to find a tunnel populated by nitrogolems. Follow the tunnel until you reach a passage with mosaic walls, which leads to a room with eight pillars. The yellow key is at the north end of the room - when you approach it, six of the pillars will lower to release roaches, green enemies which try to get out of sight to heal themselves when heavily injured. Once everything is dead, take the yellow key.

With the yellow key, press the switch hidden in the south pillar to lower a platform hidden in the waterfall next to where the key was located. Ride the platform up to a room near the start point, then kill the waiting enemies and open the silver door in the north-east corner flanked by yellow key gizmos. Press the switch behind it to lower the walls either side of the staircase leading away from the start point.

Leave the room by the stone door (it has serpent torches on either side) and follow the hallway to the red and tan steps you used earlier. Climb up them and look at the room which has been revealed on the right - there are a number of square platforms running around the room, which you need to follow to a ledge holding the blue key. If you fall off, go through the door in the north-east corner to start again.

Once you acquire the blue key, go through the yellow key door next to it and go north-east up two sets of steps to get outside. Take the Dragon Claw and use it to kill the enemies on guard, then go north to drop into a large pool of water. Kill the ophidians and iron lich waiting at the north end of the pool, then approach through the door behind them which has blue key gizmos on either side. You can open the door by pressing use on the blue stones either side of the door.

Behind the door, take the Wand of Embers and test it on the sabreclaws that try to ambush you from either side. Go up the north-east or north-west staircases and follow either passage to a room with a central gray pillar, then destroy the sabreclaws and iron lich before going north into a chamber with a switch, which is guarded by two undead warrior ghosts.

Pressing the switch will lower three floors to the south, releasing ophidians and a Bormereth. Kill these enemies then go into the alcove that the Bormereth came from (due south of the gray pillar) to find another switch - press it and backtrack to the hallway where you found the Wand of Embers, watching out for green chaos serpents which have been released on the way.

Back in the hallway, head down the east staircase and go through the now-open door. Kill the golems and nitrogolems in the room and go east through two sets of arched tunnels to another door guarded by more nitrogolems. Go through the door and climb the stone steps to the top, then go through the wooden door on your right to find a switch guarded by gargoyles and fire gargoyles. Press the switch then go back through the door and step into the teleporter in front of you which has lowered, which will put you on top of the waterfalls to the north. Head forward and press the switch in front of you which is guarded by sabreclaws.

Pressing the switch will allow you to reach the green key, but also lowers a floor behind you with two vampires - you can avoid their bat and projectile attacks by strafing. Head south to drop off the waterfalls, then go west through the door and back through the arched tunnels. Turn right to go into another tunnel and enter the room with the green key, guarded by nitrogolems and Knight Archers. Watch out for the alcoves that open in the north wall when you take the key, releasing ophidians (plus undead warriors on medium or hard skill levels).

Return to the hallway where you found the Wand of Embers, and go down the west staircase to a door requiring the green key. Kill the nitrogolems in the next room then head north through an arched tunnel and kill the undead warrior ghosts on the other side. Two walls will lower either side of you as you enter the room - go through either wall and follow the passage, watching out for a crushing ceiling on the way. After passing the crusher, kill the ophidians and climb the stone steps to a switch which you should press. Backtrack past the crushers and through the arched tunnel, then go through the south-west wall which has lowered. Follow the tunnel to a fast-flowing stream which will carry you to a large hall guarded by two Shadow Beasts - be careful when fighting them as they may release lethal wraiths when injured. Once both beasts are killed, head west to a large curved staircase and climb it to a staircase at the top.

The teleporter puts you in an area north of the hall. Turn right and follow the passage to see several enemies ahead of you, including one or two Butchers - once they are dead, press the switch in the north wall which will lower two walls to the east. Kill the iron liches waiting behind these walls then go south-east up the steps and pass between the spined pillars. Press the switch on the east face of the pillar, which will lower two more walls to the west. Kill the weredragons and chaos serpents waiting behind these walls, then climb up a set of steps in the south-west corner and kill one or two undead warrior ghosts on your left. When you step into the area they came from a wall will open behind you - turn round and kill the iron lich visible through the opening, then go outside and step into the teleporter it was guarding. You will be sent to a chamber south of the main hall.

Turn round and head into a room with a red floor and pillars, which is guarded by sabreclaws and ophidians. Climb the west staircase to the top, arriving in a room with a large water pool. Kill the sabreclaws and Bormereth guarding the room (they are likely to infight with each other), then go to the north-west corner of the room to find a switch. Press it to open a section of the west wall and reveal a passage which you can follow, watching out for crushers on the way. At the end, open the decorated east wall and kill the vampire behind it, then step into the teleporter it was guarding.

You will arrive on top of the waterfall in the previous room. Turn left and press the switch in the north wall, then backtrack to the room with the red floor and climb the south staircase to the top. Pressing the earlier switch has opened four walls in this room to release undead warriors; kill all the enemies, then go through the south-east wall and press the switch in this chamber. This will lower the south wall in the previous room and release weredragons - kill them and go into the teleporter behind them.

You will be placed on a platform in the main hall. Turn round to press the switch behind you, which will lower the exit teleporter leading to E2M7: The Black Gate.

From the start of the level, go down two sets of steps then pass through a door on your right to enter a stone room. There is a Torch in an alcove at the north end of the room - taking it will open a door to the south and release a Shadow Beast. Kill the beast, then look in the passage it came from to find a Blood Scepter and two Timebombs of the Ancients.

In the eastern-most room, enter the passage south of the stone steps to find a Firemace guarded by undead warriors.

From secret #4 below, go north-west up a set of steps and round a corner to find a Tome of Power. Watch out for the sabreclaws that are released behind you when you take the artifact.

After reaching the red-floored room south of the hall with the exit teleporter, go down the east staircase to a stone chamber populated by golems. Turn right and head into a dead-end with a switch which will release a number of undead warriors from a nearby alcove. Head north-west and go through another wall which has lowered to find another Tome of Power.

Linedef 4016 has a transparent grate texture on its front side, but no texture on its back side. This means that the fence appears to have an impassable gap when viewed from the east.