E2M1: A Sacred Place is the first map of episode 2 of Heretic Treasure Chest. It was designed by Magicsofa and uses the music track "Elf" from Heretic, created by Kevin Schilder. 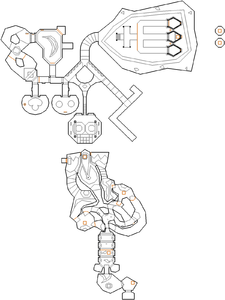 Map of A Sacred Place
Letters in italics refer to marked spots on the map. Sector, thing, and linedef numbers in boldface are secrets which count toward the end-of-level tally.

Enter the tunnel in front of you and walk forward until you pass a tile with a blue trident - the wall ahead will lower to reveal four golems guarding an Ethereal Crossbow, and two closets containing gargoyles will open behind you. Head past the golems to a cavern with three passages branching off it, enter the north-west passage and follow it to an undead warrior guarding a Quartz Flask - when you collect the flask you will drop into another cave with three golems. Destroy them then step on the gray tile in this cave to lower three lifts; ride the west lift up then head up the steps to a switch guarded by two or three sabreclaws. The switch will lower a teleporter that you can see through the window.

Go back to the cavern with three passages and follow the north passage to another Quartz Flask, which will drop you into a cave with more golems. Step on the gray tile in this cavern to lower three lifts; ride the north-west lift up then climb the steps to another switch guarded by more sabreclaws. Press the switch, then backtrack to the cavern with three passages and follow the east passage to a pool of water with a third switch that will open a passage containing Claw Orbs and a Dragon Claw. Follow the water, killing any gargoyles and ophidians that block your way, until you reach the teleporter you saw earlier and step into it to reach the second part of the level.

Skay the undead warriors ahead then head north down some steps to a T-junction. Turn left until you see two nitrogolem ghosts ahead, then turn left again to find two weredragons in front of a tombstone. Press the tombstone then run north and west through a wall leading to a green passage before it closes (you will activate a crusher en route; if you fail to pass through the wall before it shuts, then you will need to time your run past the crusher when you try again). Follow the green passage north past some golem ghosts until you reach two sets of bars with a switch between them; press a second switch outside the bars to open the bars furthest away from you, then backtrack through the passage and head south through the wall that opens ahead of you. Continue south to enter another small chamber with two more weredragons, then step on the brightly-lit patch of floor next to the crystal vial to teleport to a ledge with a Silver Shield. Head forward to a mossy room with a crescent-shaped ceiling, then walk through the bars you just opened and press the switch between them. Approach the south wall made of gray skulls to lower it, then return to the T-junction and head north down a hole that has appeared in the floor.

Go forward to a damaging blood pool, then go round the corner to see a large trident-shaped platform guarded by disciples of D'Sparil. Go round to the east side of the trident to find a trail of Claw Orbs leading to a switch. Press the switch then go back round to the west side of the cavern and climb up the steps - three chambers containing undead warriors and an iron lich have opened ahead, and more disciples will teleport in as you walk along the trident. Enter the north and south chambers and press the switches inside them, then enter the middle chamber and step on the gray pad inside it to finish the level.

After passing the Ethereal Crossbow at the start of the level, you will see a Bag of Holding and an Enchanted Shield through two windows left and right. You can reach the items by using the east lift in the west cave, and the south lift in the north-east cave, respectively.

After teleporting to the second part of the level, look behind the saints' pictures by the east wall to find a Chaos Device. This item is the only way to return to the first part of the level.

In the final cavern with the trident platform, look between the three chambers to see red teleport glitter. Stepping on each patch will teleport you into a small chamber with Quartz Flasks (in multiplayer, the chambers will contain more artifacts).

This level contains four spawn points, all of which are found in the final cavern: