E2M1: Beast Depot is the first map of the second episode of Strange Aeons, designed by Impie in 2015 and constructed in Doom Builder 2. 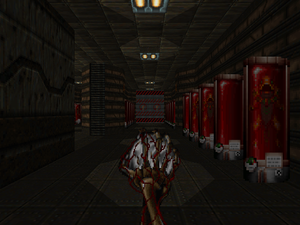 The Traveler's first view of The Shattered City.

Two aisles of monster containers lead to a set of large, metal doors that only open by switch; beyond the doors, an alarm blares endlessly. Making any noise will cause a Flayworm to burst through the side door and attack. After clearing out all the gunmen in the base, follow the left wall from the entrance to the yellow keycard and use it to access the observation booth up the main hallway.

The booth has three switches. Flip the left and right switches first and release the Ghoul and Flayworms from their cages. Help the Ghoul kill the monsters, then flip the middle switch to open the door to the arena; the Ghoul should wipe out the Men from Leng who come charging in. Go into the arena and grab the red keycard.

A pack of Flayworms will ambush you on your way to the red door switch. Open the red door, kill the Flayworms beyond, and grab the blue keycard. Beyond the blue door is the exit slipgate.

Beware the chasm by the exit slipgate: falling in means instant death.

Before leaving your house, open the bedroom door to your left and grab the Blue Armor.

When the Flayworm opens the side door in the creature containment room (at the beginning of the map), walk through and enter the ventilation grate on the left: it hides another Blue Armor.

The Beast Depot was another of the original map concepts from Impie's crude 1995 design document. The player would begin exploration of a new "mad science" environment featuring monsters kept in glass tubes.

The protagonist of The Dream Quest of Unknown Kadath also allied himself with Underworld Ghouls during his journey.