E2M1: Receiving Station is the first map of The Shores of Hell in Doom the Way id Did. It was designed by Xaser Acheron in the style of Sandy Petersen and John Romero. The par time defined in the DEHACKED lump is 45 seconds. 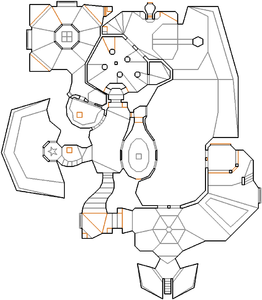 Map of Receiving Station
Letters in italics refer to marked spots on the map. Sector, thing, and linedef numbers in boldface are secrets which count toward the end-of-level tally.

Right from the beginning go around the column to find an armor, then go right, all the way to a switch. This switch reveals a fire behind you. This acts as a teleporter, so use it. On the other side, use the nearby teleporter here to warp to a red room. The blue key is in front of you. If you go further through the passage, you will find a lot of enemies ambushing you at that point. Instead of going that way, just pick up the blue key and head back through the teleporter. Go down the staircase here, and go to the end with the shotgun on the window. There is a switch on the wall which lowers the teleporter behind you. Use it and you will wind up in a new area with a blue door which is the exit.