E2M1: Receiving Station is the first map of episode The Depths of Doom of No End In Sight. It was designed by Xaser in the style of Sandy Petersen and John Romero and is the early version of the level with the same name in the Doom the Way id Did. 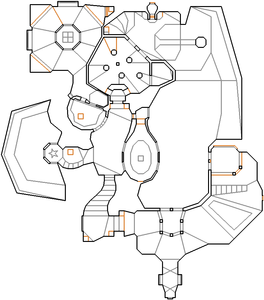 Map of Receiving Station
Letters in italics refer to marked spots on the map. Sector, thing, and linedef numbers in boldface are secrets which count toward the end-of-level tally.

Head straight forward to a columned area with an armor then turn right and cross a harmful blood pool to reach a switch on the east wall. Flip the switch to raise a set of steps behind you, climb up them to find a pair of windows and press the button between the windows to reveal a fire wall behind you, which you can step through to be teleported to a pad in the south-west corner of the level. Step on another teleporter pad on your left to reach a room with a red floor (which is harmful), then quickly step across it to the doorway in front of you and turn left to collect the blue keycard guarded by demons.

Re-enter the red room and step on the teleporter to return to the previous area, then go down the stairs in front of you and head straight forward towards a red wall. There is a switch just north of this wall; flip it to lower a teleporter behind you and step through it to an area with several monsters, including a cacodemon on a raised ledge. Open the exit door in the north wall (which requires the blue key) and kill a waiting demon, then flip the switch to finish the level.