E2M1: Sunken Serpentorium is the first map in the Mount Suffering episode of Heretic Upstart Mapping Project. It was designed by Zergeant and uses the music track "Mole" by Kevin Schilder. 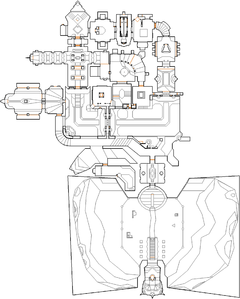 Map of Sunken Serpentorium
Letters in italics refer to marked spots on the map. Sector, thing, and linedef numbers in boldface are secrets which count toward the end-of-level tally.

Head straight forward and press the switch between the steps in front of you to open a door at the top, then go up and collect the Ethereal Crossbow above the switch so you can kill the golems in the next room. Head through the north door to reach a T-junction and turn left, then follow the wide path past golems and gargoyles until you ascend a curved staircase leading to a gray door. Behind the door are more golems and gargoyles along with one or two undead warriors, as well as two disciples of D'Sparil on bringest them oneth skill level or higher; press the switch on the north wall to open two silver doors to your left, then go through to a hall with more of the same enemies. The yellow key is at the west end of the hall between one or two ophidians; picking it up will open the north and south walls to reveal a number of weredragons, some of which will teleport to block the entrances.

Backtrack to the T-junction and take the right-hand path this time, where some flowing water leads down to a large pool with a walkway running through it. Follow the walkway west until you see a small door on your right, then go through that door and head up some steps past golems, an undead warrior and an ophidian; two disciples will also be revealed behind a wall at the top. Turn right at the top of the steps to enter a room with gargoyles, golems and undead warriors along with a weredragon standing on a teleporter, then leave the room by the doorway in the south-west corner to find another hall with a walkway over a water pool. Head north up the steps and open the yellow key door at the top to enter a large T-shaped hall, then go forward to a hanging corpse which is overlooked by undead warriors, golems, gargoyles and one or two ophidians - watch out for two crushers as you go. Head east from the corpse and go round the corner to find two ophidians and gargoyles guarding a switch, which will open a large door in the neighboring room.

Retrace your steps to the room where you found the weredragon on the teleporter and go through the south-east doorway to return to the curved steps, then go north through the door you opened earlier; as you enter the next room, some closets will open and release undead warriors, nitrogolem ghosts and disciples. Head up the curved staircase, watching out for another alcove that opens to reveal an iron lich, and open the door at the top to enter a chamber with two Timebombs of the Ancients on a fountain, then open the door in the east wall and step over another set of three bars to reach a switch that will lower them, opening the path to the green key. Drop down to the ground and head north towards a metal door, which will lower as you approach to reveal four weredragons on yellowbellies-r-us or lower, or a maulotaur on higher skill levels; the room also holds undead warrior ghosts and a couple of them will teleport behind you. Enter the next room and walk round to the north side of the central column to find a switch that will lower the bars blocking the doorway opposite. Head through the doorway and open a door at the top of some curved steps to find a room full of golems, undead warriors and gargoyles who are guarding the green key in the north-west corner. Watch out for more monsters appearing from the north and south when you pick up the key.

With the green key, backtrack to the T-shaped hall with the hanging corpse on the other side of the level; once there, open the north door between the green gizmos to confront two undead warrior ghosts and a group of gargoyles then open the door behind them to enter a chamber with undead warriors and an ophidian who are guarding a platform with a switch on it. Walk round the crusher in the middle of the room and press the switch to open the east door (and open an alcove behind you with three weredragons) then look into the next room and destroy all the golems and nitrogolems coming through the door before entering it. There is a platform in the middle of the room with two or three ophidians on it - press the switch by the window in the north-east corner to raise a lift next to the platform, ride that lift up then press the switch on the metal column to open the east door along with two alcoves containing gargoyles.

Look through the east door and kill any undead warriors and gargoyles waiting behind it, then run over a small gap to reach the platform behind the door; there are two ophidians to your left, and a third ophidian on your right guarding a blue switch. Press this switch then backtrack all the way to the start of the level, where a barrier has lowered allowing you to climb up a metal staircase. Go through the door that automatically opens at the top of the staircase then step on the "sky-pool" in the middle of the room to finish the level.

Turn right at the T-junction near the start but do not drop into the water below; instead, walk west along a narrow ledge then go through some more flowing water to find a Silver Shield. Taking the shield will release some gargoyles and fire gargoyles from a nearby hole.

Turn left at the T-junction near the start and follow the path until you see a brazier on your left, then turn left to see a door leading to a room with gargoyles and golem ghosts. Follow the path west and go up some steps to a switch guarded by an undead warrior ghost, which will lower a barrier on the west side of the room and reveal more undead warrior ghosts and gargoyles guarding a Dragon Claw.

Go to the west side of the T-shaped hall to find a Hellstaff along with two Lesser Runes and two Greater Runes. Picking up the weapon will activate three crushers behind you.

The switch past the green key door has a Tome of Power on top of it. Press the switch to open an alcove with three weredragons then look inside the alcove to find another switch that will lower the tome.

* The vertex count without the effect of node building is 3093.