E2M1: Switchback (A 3-in-1 Remake) (M_PHOBUS.WAD) is the first map in episode Descent to Darkness of ZPack. It was designed by James Cresswell (Phobus) and uses the music track "Nuts and Bolts" from Donkey Kong Country 3, composed by Eveline Fischer, in a MIDI version sequenced by Dave Phaneuf and Sam Wolf. The par time defined in MAPINFO is 9:00. 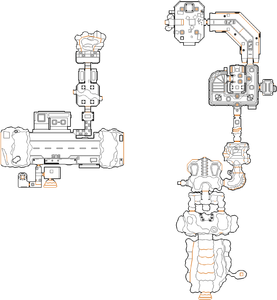 Map of Switchback (A 3-in-1 Remake)
Letters in italics refer to marked spots on the map. Sector, thing, and linedef numbers in boldface are secrets which count toward the end-of-level tally.

* The vertex count without the effect of node building is 4746.