E2M1: System Shutdown is the bonus map of Realm of Parthoris. It was designed by Sebastian Graham (General Rainbow Bacon) and uses the music track "Oracle Night," by Gus Knezevich (Alfonzo). 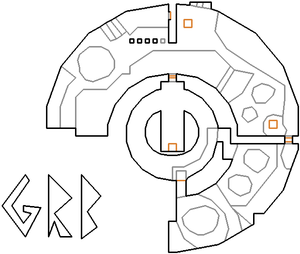 Map of System Shutdown
Letters in italics refer to marked spots on the map. Sector numbers in boldface are secrets which count toward the end-of-level tally.

Take the Ethereal Crossbow and pickups in front of you then head due north to land on an island with a Bag of Holding, a Quartz Flask and Lesser Runes along with three undead warriors. Head north up some steps to destroy three sabreclaws then press the switch behind them, which will lower a pillar on your right; step over that pillar then turn left and left again to enter a teleporter which will return you to the starting point. Follow the path east until you reach a yellow key door with Gauntlets of the Necromancer in front of it, then head south-east past some golems and nitrogolems until you reach a teleporter with a Hellstaff behind it. The teleporter will send you to a ledge by the starting point, which holds the blue key.

Step across to the starting point and follow the path as if you were going to the blue key teleporter again, but instead of stepping on it drop to the floor below to find a blue key door. Open the door then head south-west across the damaging red floor (the Ring of Invincibility you collected earlier may be useful here) until you reach a cage with an iron lich. Go round the cage to a lift and ride it up to a fenced passage guarded by disciples of D'Sparil, then follow the passage round to a ledge with nitrogolems and an iron lich who are guarding the yellow key.

Drop down to the blue key door and go through it again, then follow the path north-west (collecting a Dragon Claw on the way) to the teleporter you used to return to the upper floor. Go round to the yellow key door and open it, where you will see a maulotaur guarding the exit teleporter.

If the caged iron lich uses a whirlwind, it can carry you up to the ledge with the yellow key.

This information was last verified in its entirety on September 8, 2021.

* The vertex count without the effect of node building is 299.