E2M1: Twisted Spire is the first map in episode The Badlands of HUMP mini. It was designed by whirledtsar and uses the music track "". 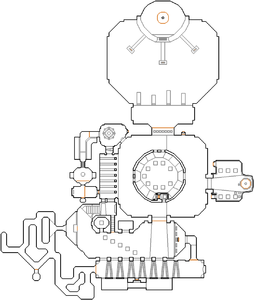 Map of Twisted Spire
Letters in italics refer to marked spots on the map. Sector, thing, and linedef numbers in boldface are secrets which count toward the end-of-level tally.

Go through the door in front of you then follow the steps down past some golems and gargoyles to a pillared area with an Ethereal Crossbow. Leave the tower then head south-west towards a wide doorway and go through it to enter a large wooden hall - some columns holding sabreclaws will lower as you enter. Follow the hall west until you see a switch in front of you with a nitrogolem above it, press the switch to lower a lift and ride this up to enter a dark maze. Turn left (south) as soon as you enter the maze and head forwards to a junction, then enter the tunnel on your left and go forward until you encounter a gargoyle; turn left at this point and follow the path to reach a sandstone hallway. Kill three ophidians that appear ahead (or one ophidian and two undead warriors on bringest them oneth skill level or lower) then go to the end of the hall to find a passage leading to a switch, protected by a nitrogolem and one or two undead warriors.

Go back round to the sandstone hallway where some more enemies have been released, then drop down to the wooden hall below and head west towards the lift you used earlier; this time, go up the steps to your right and pass through an open door at the top to confront fire gargoyles and one or two undead warriors then head straight forward to a wooden structure. Kill the weredragon on your right and press the switch it was guarding to lower the wooden bars and reveal the green key. Drop out of the window next to the switch to land in the center area where various enemies have teleported in, then head east past some large metal bars to a door between two green gizmos and open it to find a switch that will lower the bars. Go through the bars to a large water pool where three iron liches will appear; use the Tome of Power on the docks in front of you to help destroy them. Enter the pool and look behind all the wooden columns to find three switches that will open the doors to the black structure behind you. Go inside it and drop down the hole in the center to finish the level.

If you are using a source port that supports the MAPINFO lump, you will proceed directly to E2M9: Praevus Smeltery. Otherwise, you will have to go through three transitional maps titled "Nexus" to reach this level.

Halfway along the sandstone hallway at the south end of the level is a switch; pressing it raises the columns in the wooden hall below, allowing you to run across them to a chamber containing a Hellstaff.

When you reach the ledge leading to the green key, go through the door on your left to find a Phoenix Rod guarded by golems and gargoyles. The door will close behind you when you go towards the weapon, and you will have to fight past a pack of undead warriors along with weredragons and an ophidian to get out.

Six barrels (Things 27 and 38 through 42) in the tower in the center have no flags set for any of the three difficulty classes, so they do not actually appear in the level.

After pressing the north-west switch in the Dragon Claw chamber, if you walk over the metal blocks that rise and drop into the south-east corner, you will be unable to get out of this gap without cheating.