E2M1ED.WAD is a single-level PWAD designed by Ed Boling. It is notable for being perhaps the first "complete" third-party Doom level ever created (the earlier mods were clearly marked as editing prototypes, or had their architecture deliberately simplified for lack of a reliable node builder). The readme file provides no canonical name for the map.

Although the idgames package is dated April 29, 1994, the author posted a release announcement to alt.games.doom on March 24, before the final version of DEU 5.0 was available. The time stamp on the WAD itself is March 23. 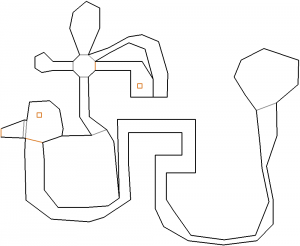 Map of E2M1ED.WAD, E2M1
Letters in italics refer to marked spots on the map. Sector, thing, and linedef numbers in boldface are secrets which count toward the end-of-level tally.

Run through the tunnel to your south. Keep running through the tunnel until you get to a pedestal which rises and falls. Use the teleport pad on this pedestal, and you be warped into a corridor west of a rising and falling elevator. Use it to enter the second-lowest passage to the east of the elevator. Step on the teleport pad in this room, and you will find yourself near the pedestal again, only part of the western wall has lowered to reveal shotgun guys. Flip the switch directly behind them.

Of the other alcoves around the elevator, not including secret #1, the alcove at the bottom of the shaft only contains an imp, while the dark, flashing corridor at the top of the shaft leads to a cacodemon and a rocket launcher.

Due to its simplistic nature, this level is very easy to complete regardless of difficulty level. However, because the directions the pedestal and elevator move in when they are first activated are chosen at random, getting the fastest time may depend on luck. If the pedestal chooses to move up first, you will need to wait for a few seconds before it begins to move and the teleporter is reachable. Nevertheless, if both the pedestal and the elevator choose to move down first, you can perform a shortcut jump from the western corridor of the shaft by straferunning at the opening, and releasing the run key just before you fly out. If the run key is released at the correct time, you will jump directly into the eastern corridor, allowing you to finish the level faster. If is not, however, you will slam into the walls above and below that corridor. This may also take a bit of luck, as it is possible for the imp standing on the platform to block your jump due to the game's improper Z-clipping.

When going for NM100S, it is possible to jump from the western corridor directly into the passage leading to secret #1, by running at the western corner of the passage's opening. Only regular running will work; if you try to strafejump into the passage, you will slam into the upper wall instead. If the elevator is rising when you are inside secret #1 or the passage leading to it, you can eliminate the wait time to escape by standing on the outer edge of the passage, which will block the elevator from rising and cause it to fall again. Either way, once the secret is registered, you can jump into the eastern alcove from the secret passage by running at the northern corner of its opening. Again, only regular running will work here.

* The vertex count without the effect of node building is 104.

This map features possibly the first ever use of an illusory wall (linedef 62).