E2M1 is the first map of Forest Valley. It was designed by Jean-Serge Gagnon and uses the music track " ". 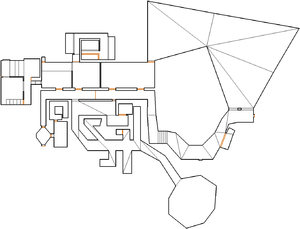 From where you start, travel down the hallway to the west until you see a door at the end. Open it to find the exit switch.

Neither of the keys present in this level are required to complete it, but open access to other areas. The red key, found in a wide room accessible through two doors, opens a side room with three rockets and a box of ammo. The blue key, found in a secret area, opens a room with a blood pool and a medikit inside.

Crossing the gap between the red door and the unlocked door in the hall (linedef 419) opens a door which leads into a blood-filled tunnel visible through a window. You can collect a radiation shielding suit on the first platform inside, and then follow the path through the tunnel until you find a room with two stimpacks, two rocket boxes, and a rocket launcher. A second radsuit can be found here to cover your exit.

* The vertex count without the effect of node building is 324.