E2M2: Filtration Compound is the second map of The Shores of Hell in Doom the Way id Did. It was designed by Sarah Mancuso (esselfortium) and Xaser Acheron in the style of Sandy Petersen and John Romero. The par time defined in the DEHACKED lump is 2:30. 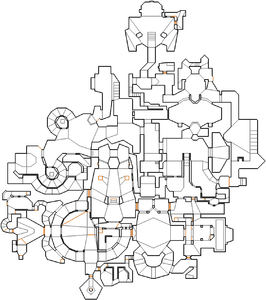 Map of Filtration Compound
Letters in italics refer to marked spots on the map. Sector, thing, and linedef numbers in boldface are secrets which count toward the end-of-level tally.

Notice the set of lift floor textures in front of you. Move forward and to the left to a door. Inside this room, find the switch here and it should lower those textures as stairs. Go down these steps following a path until you find a switch. This opens the rest of the passage. Go through here, up the stairs and across the walkway overlooking the blood. In this big area, if you take the stairs, you will find the blue door and also see the red skull key in the window. For now, head westward, into another pool of blood where you can find another box of shells. Head west again into the next chamber and go north up the stairs and follow a path to a switch. Pressing it causes a ledge to rise in the room you see through the window. Now you need to cross the blood into that area. You can grab the radiation suit here, or the one right next to the blood. Either way, go west and then up the spiral staircase. Then climb the next spiral staircase to the south. You will find a room with a blood pool, another path, and a switch. Press the switch, and go back down the spiral staircase again. Now head right through the newly opened passage, through a small tunnel. At the end is another room with a spectre and the blue skull key. Grab it and drop down. You should be right next to the blue door, so open it.

Cross the walkway and you will find two radiation suits, so pick up one and drop down into the blood going west to the next door. Take this spiral staircase down to a T-shaped walkway. If you go to the center of the walkway, the part from where you came will sink into the blood. If for some reason you want to go back, restore it by pressing the switch on the northern walkway. Go into the C-Shaped spiral staircase to your west, either by using the walkway or by dropping to the south to the base of the staircase (by the way, if you drop to the north, it looks like you cannot escape, but you can by moving around a bit and the walkway will lower. Do note that you cannot make it rise again however). Take it all the way to the other end into the next room. In this room, go up the stairs to raise paths in the blood leading to a plasma gun and a rocket launcher. However, you can only choose one gun to take, as the other weapon's pedestal will rise when you take one of them. When that is done, keep heading east and you will eventually stumble upon the red skull key. Take the lift up to get it and press the switch here to raise a bridge up so you can cross over to the red door. Follow the path going westward. You will have to drop down into a blood area at one point. Should you want to go back, the switch by the door lowers the walkway, and you can use the lift in the northeast. Otherwise, go through this door and the next one to leave the level.

You can find a box of shells in a side room containing blood and a lost soul once you get past the steps at the start. An armor is in the next big room.

Behind the red door, the room on the left has a rocket.

* The vertex count without the effect of node building is 1515.