E2M2: Forgotten Graveyard is the second map in the Hellbound episode of Masters of Chaos. It was designed by Caleb26 and uses the Hexen music track "Swamp". 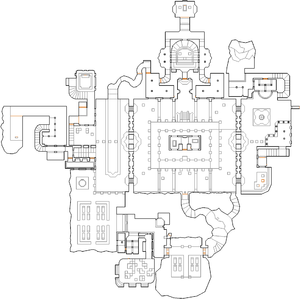 Map of Forgotten Graveyard
Letters in italics refer to marked spots on the map. Sector, thing, and linedef numbers in boldface are secrets which count toward the end-of-level tally.

Go forward through the graves and turn left at the junction, then go through the archway ahead and turn right. Go around the corner to see some bars in front of you, then turn left and climb the stairs to get into the building you just passed. Turn right and follow the corridor to a room with numerous crates.

Watching out for golems, head south until you reach the opposite wall (collecting an Ethereal Crossbow on the way, then turn right and go as far west as you can, then head north past the barrels until you reach a switch. Press it to lower the bars you saw earlier, then make your way out of the building. Watch out for golems and undead warriors that have been released into the corridor.

Back outside, go through the opening in the hedge that is now accessible and head forward into an area with graves bordered by more hedges. Take the yellow key, which will seal the entrance and cause an iron lich and several reivers to teleport into the area. Fight them off using the supplies in the area; the barrier blocking the entrance will lower after 800 tics (about 23 seconds).

Once you can escape, backtrack to the starting area and go right at the junction this time. Head down the stone steps - you will see the green key on a ledge ahead through some bars. Follow the path to an area with a large central building and take the Dragon Claw at the end of the path, using it to kill a number of enemies that rise from the floor. Head around the large building to its north side, and go north through a door with yellow key gizmos which is guarded by one or two undead warrior ghosts.

Climb up the steps ahead, watching out for a sabreclaw ambush, and go through the wooden doorway at the top to reach a T-junction. Go left and follow the passage to a stone door, opening it to find a room with barrels. Clear out the sabreclaws and press the switch in the south-east corner, then return to the T-junction to find that a wall has opened to reveal weredragons. Kill them, then go right at the junction and follow this passage to another stone door and another room with barrels. Destroy three more sabreclaws, press the switch in the south-west corner and return to the T-junction.

Kill the green chaos serpents which have been released here and go through the walls you just lowered to a room with a metal tomb. Press the switch on its north face and head back through the yellow key door - on the way you will find that two disciples of D'Sparil have been released along with a Tome of Power. Go through the yellow key door to find that a staircase has risen ahead leading up to the central building. Follow the fence round to the south side of the building and go through the open gate here. Pass through the stone door and slay any waiting nitrogolem ghosts, then go to the east side of the building and throw the switch by the south window.

Leave the building, go back through the gate and head to the east side of the fenced area. Look east to see a stone ledge with a Quiver of Ethereal Arrows and two Quartz Flasks, and make a running jump to get there. Follow the ledge through a low opening to its east side, where you will find that three gray platforms have risen. Follow the platforms to a pillared area and head through the doorway to the south, then climb the stairs to the top and go round the corner to press another switch.

Head back down the steps, watching out for ophidians that have been revealed, and backtrack to the central building. This time, go to the west side of the fence and look west to another stone ledge with two Quartz Flasks and an Energy Orb. Make a running jump to the ledge and follow it round to the west side, hopping over some more gray platforms (which rose when you pressed the previous switch) to a wooden area with crates. Climb the steps here and open the door at the top.

Go through the door and follow the passage. A wall will open on your left to reveal three or four dark bishops; slay them and continue following the passage, going up a staircase to a room with three ophidians and a gray altar. Press the switch hidden on the north side of the altar, dispose of the disciples that are released nearby, then backtrack to the area with the central building.

Back at the central building, head round to the south-east corner of the ground level and go east through an archway. Straight ahead of you is a teleporter between two pillars which lowered when you pressed the previous switch. Step into the teleporter, then turn around and follow the steps up to the green key.

Follow the passage and go down a staircase to another outdoor area. Turn left and follow the path round until you reach a fenced area with a switch; before pressing it, destroy the reivers that appeared when you approached the switch. After pressing the switch, head back along the path and up the stairs to find that some gargoyles and undead warriors have been released from an alcove. Once they are dealt with, return to the area with the central building.

Back at the central building, go through the stone wall to the east using either of the archways and head to the large fountain in this area. East of the fountain, an exit door has opened; go through it to find the exit switch.

Enter the covered area south of the bars that block the doorway to the yellow key, then open the door in the west wall. The storeroom here contains a Shadowsphere guarded by one or two golems.

There is a large fountain in the area east of the central building. North-east of this fountain is a stone staircase; climb it and go through the door on your left to find a room with barrels. A Firemace can be found on the balcony, if it has spawned.

Next to the teleporter leading to the green key is a pillar holding Gauntlets of the Necromancer. Press the switch on the east face of this pillar to lower it.

The switch that lowers the pillar holding the Gauntlets of the Necromancer (linedef 1847) appears to be embedded in the floor due to incorrect texture alignment.

* The vertex count without the effect of node building is 3008.