E2M2: Lucifer's Spell is the second map of episode 2 of Heretic Treasure Chest. It was designed by Paul Corfiatis and uses the music track "Dark" from Heretic, created by Kevin Schilder. 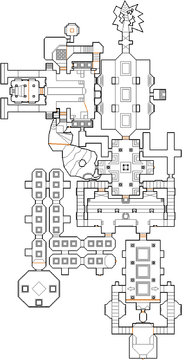 Map of Lucifer's Spell
Letters in italics refer to marked spots on the map. Sector, thing, and linedef numbers in boldface are secrets which count toward the end-of-level tally.

Head straight forward until you reach Gauntlets of the Necromancer guarded by golems then continue to the door at the south end of the hall. Behind this door is a cross-shaped chamber with several more golems as well as two nitrogolems and one or two fire gargoyles - press the switch in the east wall to open the west door, then go through it to a cavern containing more gargoyles and head north-west until you pass through a narrow opening. A wall on your right will lower to reveal nitrogolems; step over this wall and pass through the door ahead to reach an outdoor area with a large water pool. Follow the stone walkway round, collecting an Ethereal Crossbow on the way, and head north through a second door then climb a staircase past gargoyles and undead warriors (a chamber containing more monsters will open behind you) to a lift that will take you up to a switch. The switch will raise a bridge over the water pool you passed earlier; go back outside and cross that bridge to a door, which you can open to find two to four ophidians guarding the yellow key.

Backtrack to the cross-shaped chamber, passing an iron lich (or disciple of D'Sparil on easy skill levels) waiting by the bridge, then head south through the yellow key door to a wide hall - the blue key is on a round pillar in front of you. Go through the wooden door in the north-west corner and head up a staircase guarded by golems to reach a switch, press it then drop to the ground and head through the door in the north-east corner of the hall where another staircase leads up to a second switch, which will lower the pillar holding the blue key. Take the key then head through the south-west door and follow the tunnel behind it west, south and east, which will lead you through three red doorways to a switch guarded by a weredragon. Press the switch then head north-east through an open door and follow the tunnel behind it all the way to the green key.

Taking the green key will open several closets in the tunnel containing sabreclaws. Follow the tunnel back to the switch you pressed earlier; a second switch has been revealed in a neighboring alcove that will open the nearby door and allow you to return to the blue key hall. Open the south-east door (requiring the green key) and head south past some weredragons towards two Bags of Holding by the exit door - bars will close in front of the door before you can reach it, and two walls indicated by arrows will lower. Go through either wall and head downstairs to a water-filled chamber with golems and (depending on skill level) a weredragon or two ophidians. Press the switch in the south wall then head back to the exit door which is now reachable - destroy an iron lich waiting behind the door then press the blue switch to finish the level.

South of the yellow key building is a high ledge with a Dragon Claw and four Energy Orbs. You will need the Wings of Wrath from secret #3 to reach it.

In multiplayer, spawn points for all weapons are placed around every deathmatch start point.

* The vertex count without the effect of node building is 2515.