E2M2: Mars Outpost is the second level of The Classic Episode. It was designed by Anthony Soto and uses the music track "I Sawed the Demons". 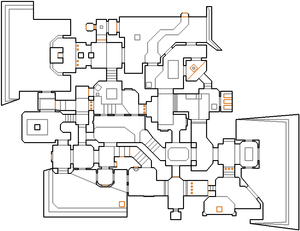 Map of Mars Outpost
Letters in italics refer to marked spots on the map. Sector numbers in boldface are secrets which count toward the end-of-level tally.

In the starting area, head left (west) and flip the switch to open the wall in the starting area which gives access for the whole level. There are three keys in the level. You can get the red and yellow ones any time you want.

In the starting area, go north to the open hallway. Head left to the staircase leading outside. Drop down into nukage pit and head through the alcove. Step to the safer place and press the switch in the next room to lower the lift behind. Use the lift and head right to the chlorine green room and flip the lever there. Get back by either dropping down or reusing the lift. Find new alcove open. In the dark room, head north and walk upstairs. Walk into room with blue floor and take the red keycard. Backtrack via the dark room. Go outside and use the teleporter to get back to the starting room.

From the starting area proceed to very north of the level, into outside area with nukage. Walk on the safe path and press the green button in the alcove. This will temporarily lower the pillar with the key. Take the keycard and backtrack to the starting room.

Open the red bars (if you have the red key). It is optional to press these two green buttons. Proceed into the alcove and use the teleporter. Enter a small room with the blue key and take it. The light in the room will turn off and a trap will open. Leave this room and jump down.

When you have all the keys you can open the blue bars. Enter the room and head right (north). Turn left and open the yellow bars. Press the switch and backtrack to see the northern wall open. There is a little ambush. Dispatch with shotgun guys and use the exit for the end.

The level was originally released as a standalone WAD titled Doom Classic 5: Mars outpost, initially hosted on Anthony Soto's personal homepage starting July 17, 2000. On July 22, 2000 he uploaded v1.1 to the idgames archive which made some lighting and texture alignment fixes.

The Classic Episode update makes several changes for a third version of the level.