E2M2: Mysterious Halls is the second map of Slaughter Until Death. It was designed by Denis Möller, then known as Panza, and includes "Demons on the Prey" as a replacement music track. 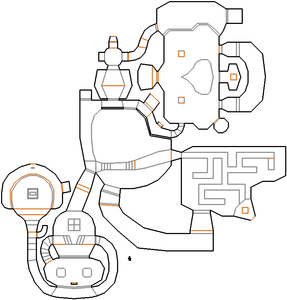 Map of Mysterious Halls
Letters in italics refer to marked spots on the map. Sector numbers in boldface are secrets which count toward the end-of-level tally.