E2M2: Proving Grounds is the second map of episode The Depths of Doom of No End In Sight. It was designed by Emil Brundage (NaturalTvventy). 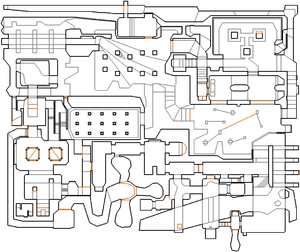 Map of Proving Grounds
Letters in italics refer to marked spots on the map. Sector, thing, and linedef numbers in boldface are secrets which count toward the end-of-level tally.

Take the shotgun then walk through the doorway to get outside; the doorway will seal behind you. Turn left and step into an enclosed area with a tan floor (there will be a megaarmor here on I'm Too Young to Die (ITYTD) and Hey Not Too Rough (HNTR) skill level, or an armor on Hurt Me Plenty) then walk through the vine wall that opens in front of you to enter a passage leading to two teleporters. Push past the monsters in the passage and step on the right-hand (lower) teleporter to be sent to a long tunnel that ends with two cacodemons guarding the red keycard.

After taking the red key, lower the lift behind it and ride this up to the start point then open the brown wall in the south-east corner so you can get outside again. Go to the south-east corner and head down the stairs to an area with several fences, then head east towards a brown wall which will open to reveal one or more spectres. Step through the wall then follow a passage south, past some alcoves containing a chaingun and several shotgun guys, to some platforms over nukage and step over them to a ledge with the yellow keycard which is guarded by a baron of Hell.

With the yellow key, drop into the nukage and head north up some steps, then turn left to confront one or more demons guarding a door requiring the red key. Go through it and step through the doorway on your left to enter a room with a dirt floor, then blow up the barrels in the dark south-west corner and step into it; this will open a wall in front of you revealing demons, but also reveal a switch in a room to the east. Go into this room and flip the newly-revealed switch on the north wall to raise a bridge over the nukage behind you, kill the cacodemons that are revealed on the opposite side then cross the bridge and pass through the exit door on your left. Flip the switch on your left to finish the level.

Instead of stepping on the teleporter to the red key, step on the higher teleporter next to it to enter a small room with health bonuses. The teleporter in this room will send you to a passage in the west corner of the level leading to a chaingun.

After lowering the lift next to the red key, you can step past it to enter a room that holds a supercharge on ITYTD and HNTR.

There is a door near the stairs in the south-east corner of the level that requires the blue key, which you can acquire by pressing the skull switches in secrets #1 and #2. Go through the door to find a plasma gun on ITYTD and HNTR, or a rocket launcher on higher skill levels.

Pressing the wall with the candle in front of it on the east side of the map (linedef 775) will open the wall to reveal a FIREBLU texture; however, because the ceiling of the adjacent sector (sector 267) is 23,352 units high, the wall sector will also rise to that height. This will cause a numeric overflow crash in certain source ports, as well as the Unity port of the game.

* The vertex count without the effect of node building is 1655.