E2M2: The Bungalow of Dr. Chaos is the second map in the Mount Suffering episode of Heretic Upstart Mapping Project. It was designed by Mike MacDee (Impie) and uses the music track "". 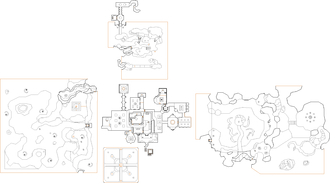 Map of The Bungalow of Dr. Chaos
Letters in italics refer to marked spots on the map. Sector, thing, and linedef numbers in boldface are secrets which count toward the end-of-level tally.

The keys in this level can be collected in any order.

Collect the Dragon Claw directly behind you and head up the steps on your right to find an undead warrior, then turn left and follow the red path west, north and east until you reach a silver door. Ignore the door and turn left, following the hallway until you see the door in front of you lower to reveal a portal, which is guarded by two disciples of D'Sparil on bringest them oneth (BTO) skill level or higher. After stepping through the portal, take the Ethereal Crossbow behind you if you need it then head past two sabreclaws to go up a staircase with a disciple at the top. Turn left at the top and head north, run north-west to cross a small gap and land on another ledge then turn left to see a switch ahead that will raise a set of steps to the east. Go up these steps then turn right to see four tiny platforms that you can run along to reach another switch next to a Quiver of Ethereal Arrows.

After pressing the second switch, go back to the first switch and head down some stone steps next to it to reach the floor below, then head west to find that a moss-covered bridge has risen leading to a chamber with a Chaos Device. Continue north to a hallway with two stacks of Mace Spheres and an iron lich, then head east into a tunnel and follow it until you get back outside and see a stone bridge in front of you. Cross the bridge, watching out for cross-winds as well an undead warrior and two disciples that appear behind and in front of you, then follow the steps up to the green key.

From the green key, walk north until you drop into the sludge below then head north to a moss-covered lift and ride it up to get back on the main path. Retrace your steps to where you found the Chaos Device and open the green key door here, then step through the portal to return to the main hall of the bungalow. Dispose of the waiting golem ghosts and go through the door in the south-east corner, then head through the wooden doorway on your left - you will hear a floor move inside the fireplace on your right, so collect the Silver Shield in front of the fireplace then step inside and use the blue skull on the back wall. Go back into the previous room to find that a wall has lowered, revealing another portal leading to a new outdoor area.

As soon as you arrive, head north-west until you find a Hellstaff and four stacks of Greater Runes in a depression; use caution if you are playing on BTO or higher as there will be two maulotaurs approaching from the north and south. From the Hellstaff head north-east and look for an opening in the root-covered wall on your right, then go through that opening to enter a cavern with a couple of gargoyles. Follow the cavern east past two more gargoyles and a couple of weredragons until you reach a water pool then go up the steps on your left and run south at the top to reach an opening that leads back outside.

Kill the nitrogolems on the stepped pyramid in front of you then follow the trail of Claw Orbs until you walk past the pyramid; a lift will lower on the west side of the pyramid, so ride it up to the second floor and run anti-clockwise around this ledge to reach a lift that lowers on the north side, take this lift up to the third floor and run clockwise to the south-side to find one more lift leading up to a gray pressure pad that will lower a pair of silver doors to the south. Run through the doors to find the yellow key sitting on a step surrounded by four Energy Orbs, which will be guarded by four nitrogolems on BTO or lower or two more maulotaurs on thou art a smite-meister (TAASM).

With the yellow key, head north until you pass through the first gate you just lowered and turn right to see a yellow key door - behind it is a portal leading back to the main hall of the bungalow. Return to the starting room and look at the gray column next to the stairs to see a switch in its south face, which will lower the stairs and reveal a passage with a weredragon inside it. Follow the passage to a hall with more weredragons as well as Claw Orbs, then use the tunnel in the east wall to enter the bungalow's dungeon. You will enter a chamber with a water pool in the middle - drop into the pool to find a Mystic Urn then head through the silver door in front of you to enter a room with some sabreclaws. Go north to a room with more Claw Orbs guarded by weredragons then west to a curved staircase leading up to a door; open the door and kill any waiting disciples, then approach the north wall which will lower to reveal another portal.

Step through the portal to enter a water-filled area and follow the trail of Claw Orbs in front of you until you get to a T-junction, then turn right and follow the path west until you reach a blue key door; look north to see an Inferno Orb and walk past it to drop into the water below, then turn round to see the first of three switches needed to release the blue key. Head back towards the entrance area and use a set of water steps that have risen to get back on the platform, go back to the T-junction and turn left then walk straight forward until you drop into the water - the second switch is behind the waterfall closest to you, and will raise another set of steps nearby to put you back on the rock path. Ignore them for now and head due east until you reach a large curving structure made of waterfalls; you can walk inside the waterfall where it touches the ground to find the third and final switch. Now use the steps you just raised to return to the path, then head north and east through an area with a low ceiling to find a set of steps leading up to a set of blue pillars - the blue key is in the middle of these pillars, guarded by disciples.

With the blue key, backtrack to the west side of this area and open the blue key door you passed earlier to find a portal leading back to the bungalow. Head west up some steps to find a piano - three switches will rise from it that you can press to unlock the three doors in the north-east corner of the room, but as each door has an iron lich hidden behind it you may want to open them one at a time instead. After opening all three doors, head through them to a square chamber (which holds four disciples on BTO or higher), collect all the ammo then drop into the pool in the middle of the chamber.

You will be teleported to a square arena that contains one or more copies of D'Sparil - one on yellowbellies-r-us or lower, two on BTO, or three on TAASM or higher. Once their chaos serpents have been killed, the sorcerers are capable of teleporting to the middle of the arena before being transported to a corner. If a sorcerer is killed while any chaos serpents are still alive, their riders will rise from the corpses and continue fighting as normal; therefore, aim to kill all three serpents before you kill their riders. Once all the sorcerers are killed, the waterfall columns in the corners of the pool will lower; step on any of them to finish the level.

A Firemace can spawn in one of ten possible locations:

There is a locked door in each key area, which requires a different key from the one found in that area and leads to extra items.

While not a bug as such, the tunnel leading to the green key does not have a silent teleport line to take players back to the tunnel on the north side of the area.

* The vertex count without the effect of node building is 4264.

This level makes use of Boom features, including locked switches (which were not included in vanilla Heretic), silent teleporters and generalized floors.