E2M2: The Fat Imp Sings Your Blues is the second level of the episode replacement Eternity. It was designed by Bjorn Hermans and Holger Nathrath, and includes a custom music track. 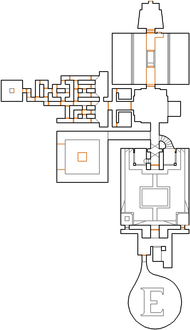 Map of The Fat Imp Sings Your Blues
Letters in italics refer to marked spots on the map. Sector numbers in boldface are secrets which count toward the end-of-level tally.

The authors received reports that the rising/lowering bridge to the yellow key could occasionally malfunction, trapping the player in the lava pit. They were however unable to reproduce the problem.

* The vertex count without the effect of node building is 639.