(Redirected from E2M2: The Lava Pits)

E2M2: The Lava Pits is the second level in the Hell's Maw episode of Heretic. 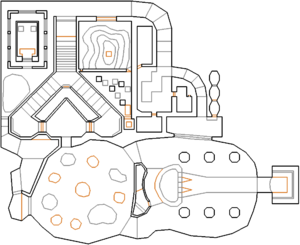 Map of The Lava Pits
Letters in italics refer to marked spots on the map. Sector, thing, and linedef numbers in boldface are secrets which count toward the end-of-level tally.

From the starting point, step forward and the wall will open revealing another vast field of lava. You will get your first look at your next new enemy, the sabreclaw. Take him out before dropping down into the pool of lava. Cross the lava pool by hopping from island to island. Unfortunately the volcanic rock is unstable and some of the islands will sink when you step on them. There are four larger ones that have a lighter texture than the others that are the stable ones, located at roughly the two o'clock, five o'clock, eight o'clock and eleven o'clock positions when viewed on the map. Your objective is the cavern on the east side, so just make a run for the southeastern opening. Take out the beasties, including the undead warriors you can see through the barred window to the north. At the eastern end of the cavern, you can see a pit at the base of the cascade with some goodies. Drop down and take out the sabreclaw. As soon as you grab any of the goodies, the wall sections will open containing gargoyles. The only way to get back up is to use the Wings of Wrath.

Get the yellow key and ride the fork-like sections up to get the goodies on top of the cascade. Use the wings to your advantage and head for the yellow doors which are to the north of the cavern with the sinking islands. Both doors lead to the same place and have the same monsters behind them. Proceed up the stairs. Press the switch to raise another staircase. When you head up, the wall ahead will open. Also, the wall behind you, the one the switch was on, will lower containing a nest of gargoyles. Get the Dragon Claw and the Chaos Device, the latter of which being the first of its kind to be found. Proceed up the stairs again. Start by going left. You will come to a large building with barred windows. Take out the undead warriors through the windows before proceeding inside. Get the Map Scroll. The inner part is inaccessible for now. Go back outside and get the Ring of Invincibility behind the lava pool. That is all you can do there for now.

Go back past the stairs and the big door (opened with the green key) and proceed down the stairs to the east. Before proceeding down the next set of stairs to the east, there are a few things to do. There is a Silver Shield in the room behind the southern door and a switch in the room behind the eastern door. The switch opens the center section of the prison building. Proceed down the stairs in the east. They lead to the room where you saw the imprisoned undead warrior earlier. Take him out if you have not already done so.

Head back to the prison. Take out the golems. When you step inside, platforms will raise containing undead warrior ghosts. Take them out and get the Gauntlets of the Necromancer and the green key. Head for the green door. Take out the gargoyles inside and press the switch in the southwest corner. This will raise a pillar revealing the exit.

The statues that mark the green door have been flagged to appear only on the medium difficulty setting. Since there is no obvious reason for such an arrangement, it was probably due to a mapping mistake.