E2M3: Cacowad's Funhouse of Artitraps is the third map in the Mount Suffering episode of Heretic Upstart Mapping Project. It was designed by Cacowad and uses the music track "". 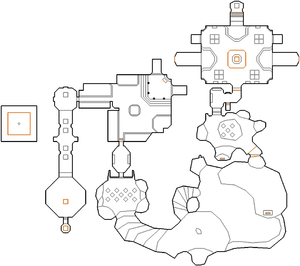 Map of Cacowad's Funhouse of Artitraps
Letters in italics refer to marked spots on the map. Sector, thing, and linedef numbers in boldface are secrets which count toward the end-of-level tally.

As its name suggests, this level requires the use of artifacts as well as weapons to make progress.

Pick up the five Timebombs of the Ancients in front of you, then turn round and use a few Timebombs to kill the golems, gargoyles and fire gargoyles in the room. Once the monsters are destroyed, blow up the pods blocking your path as well as some more pods at the end of the hallway then time your run past some exploding pods that teleport in at regular intervals to reach a Shadowsphere. Activate this artifact immediately then run east into a room full of caged undead warrior ghosts; the Shadowsphere protects you from their throwing axes but not their melee attacks, so keep your distance. Head up the steps to a blue platform and press the switch here, then head south-west to a Quartz Flask and walk past a metal barrier that lowers to enter a chamber with two Timebombs and two Morph Ovums.

Outside are three pod generators surrounded by volcanoes, and behind them are three steps with sabreclaws on them; the sabreclaws cannot hear you until you walk on the first step, so use the Ovums to turn as many of them as possible into chickens then finish the rest off with the Timebombs. Head up the steps to collect Wings of Wrath and fly south to a platform with more Timebombs and a Quartz Flask (plus an Ethereal Crossbow on bringest them oneth skill level or lower), then fly north-east to a rock ledge protected by gargoyles. Press the switch on the ledge to raise a path leading back to the previous area (you will need this path if you are not on the switch ledge when the Wings expire) then head north into a cave with several nitrogolems and more Timebombs. Press the switch by the south wall, then go through the door that opens in the north-west corner to find a relatively safe area.

Grab the Timebombs, Quartz Flask and Tome of Power in the passage then enter the next room to find a Dragon Claw, a Bag of Holding, several Energy Orbs and a Ring of Invulnerability; save the Ring for last as when you pick it up, the surrounding walls will lower and reveal a large number of undead warrior ghosts. After taking the Ring, activate it along with the Tome of Power and use the Dragon Claw's powered-up projectiles to rip through the crowd, then shoot the switches at the back of the east and west alcoves to lower two barricades and reveal a Chaos Device inside the north alcove, as well as releasing two packs of gargoyles. After taking the Chaos Device, activate it to return to the start then walk through the now-open exit door in front of you and step into the blue glitter to finish the level.