E2M3: Cardinal Points is the third map of episode 2 of Heretic Treasure Chest. It was designed by Alberto Sposito (Ismaele) and uses the music track "Fred" from Heretic, created by Kevin Schilder. 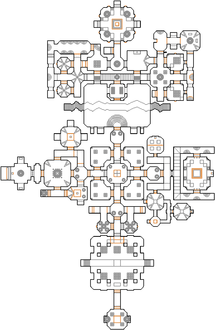 Map of Cardinal Points
Letters in italics refer to marked spots on the map. Sector, thing, and linedef numbers in boldface are secrets which count toward the end-of-level tally.

As you step off the teleporter pad four walls will open around you, revealing gargoyles on medium and hard skill levels. Head north through two doors and an undead warrior to get outside and find an Ethereal Crossbow, then cross the stream and open the stone door on the other side to reveal one to three more warriors guarding another door. After going through this door, you can proceed west or east up either staircase to reach the blue key.

After following either route, collect the Bag of Holding then head north through a door to enter a room with golem, nitrogolem and undead warrior ghosts around a lava pit (do not fall in as the pit is inescapable without a Chaos Device). Press all eight switches around the room to raise the blue key from the pit then pick it up, which will open three closets containing disciples of D'Sparil and Quartz Flasks. Backtrack to the river area and destroy the iron liches that have appeared in this area, then return to the start point and head west through a door - you will find a second door behind it which requires the blue key.

Open the yellow key door and dispatch the weredragon and sabreclaws waiting behind it, then follow the passage north to another door with a switch behind it - the columns in this room will lower to reveal disciples as you approach the switch. After pressing the switch, return to where you found the weredragon and head east through the gray door then go down either staircase to find more weredragons guarding a door, which will close as you step through it. Ready yourself before approaching the silver block in the middle of the room - it will lower to reveal the green key, but taking the key allows an iron lich and four/eight disciples to enter the room. Use the Mystic Urn by the west wall to help you dispatch the enemies, press the switch that the lich was guarding to re-open the doors then backtrack to the start point.

Back at the start point, head south through two doors to find a Silver Shield protected by a disciple then open a third door on your right to discover a switch guarded by a weredragon and sabreclaw. Press the switch then follow the passage north to return to the blue key door before heading east and south to another chamber containing a second switch. Press the second switch then go back to the corridor to find that the south door has opened - kill any monsters waiting behind the door before you step through, as it will seal behind you. Approach the lava river running through the middle of the room and deal with a maulotaur that rises from it, then head through the south door to find a Mystic Urn. Go through one more door to find the exit teleporter, but make sure to collect the Bag of Holding behind it before finishing the level.

Just before the door to the blue key room is another door that does not open when pressed. Shoot this door instead to find a Silver Shield.

A Firemace can spawn under the iron lich guarding the green key.

* The vertex count without the effect of node building is 7297.