E2M3: Contagion Engine is the third map of episode The Depths of Doom of No End In Sight. It was designed by Xaser. 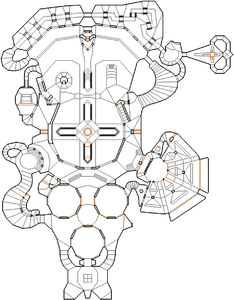 Map of Contagion Engine
Letters in italics refer to marked spots on the map. Sector, thing, and linedef numbers in boldface are secrets which count toward the end-of-level tally.

Head straight forward to collect a shotgun in the middle of three nukage tanks then continue heading west to a staircase. Climb the stairs past some imps and demons to a room with some health bonuses and shotgun guys, then take the blue skull key sitting in one of the windows. There is a switch by the window in the south-east corner of the room; press it to lower a lift behind you and reveal a staircase underneath it, which you can follow to reach a berserk pack. As you collect the item you will see a brown wall open outside and a set of steps rise up to the window that held the blue key; run through that window to drop through the wall that just opened and land in a large nukage pool. Run north-east past a rotating column to a step guarded by three demons; there is a switch here that you can flip to raise a set of steps leading up to the yellow skull key (it is not needed to complete the level, but can be used to open the door next to it).

From the yellow key, head north to confront a cacodemon guarding a door requiring the blue key then open the door to dispose of a waiting baron of Hell. Go through the door and head north up some steps to a switch, which will raise a bridge on your left leading to the exit door, then carefully look behind the switch to find another switch on the north side of the pillar. Press this second switch then go down the steps and head west across a smaller bridge that has just risen to a door requiring the red key - next to this door is a staircase leading up to another switch. Press this switch to raise a set of steps around the nearby tower, then climb up them to a fourth switch - this will open a set of doors that you will need later to reach the exit.

Go back through the blue key door and head east along a set of steps guarded by imps until you reach a blood trench. Follow the trench (the blood is harmful so you may want to walk on the low wall next to it) until you reach a second trench with nukage and follow that trench to another staircase. Climb the stairs to a narrow, winding walkway and follow it through two rooms containing nukage and blood, killing any monsters that block your way, until you reach a brown room with a rocket launcher. Head east into a room with a crucifix-shaped blood pool and kill a waiting baron, then head through either of the north or south false walls and follow the passage round to a switch. Press the switch to lower a teleporter, deal with the baron that ambushes you from behind, then step into the teleporter to reach a cross-shaped walkway above the large nukage pool. Run north along the bridges you raised earlier, killing any monsters that block your path, until you reach the exit door and flip the switch behind it to finish the level.

As soon as the level starts, turn left and go down some steps to an area with four moving platforms. One of the platforms holds a megaarmor.

On the west side of the level is a door with blue lights (it does not require any keys to open). Go through the door to see a trail of candles leading into a room with a chaingun; as you approach the weapon the north wall will lower to reveal a teleporter, which leads back to the starting area.

There is a computer room with a plasma gun in the south-east area of the level behind two doors. Look behind the computer board in the north-west corner to find a switch that will open two walls next it and reveal a spectre, then go through either wall and follow the short passage to a switch that will lower the red skull key for you to collect. Watch out for the spectres, imps and shotgun guys waiting for you when you return to the computer room.

* The vertex count without the effect of node building is 1517.