E2M3: Nightmares is the third map in the Hellbound episode of Masters of Chaos. It was designed by Caleb26 and uses a custom music track. 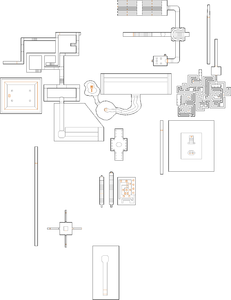 Map of Nightmares
Letters in italics refer to marked spots on the map. Sector, thing, and linedef numbers in boldface are secrets which count toward the end-of-level tally.

Turn around and follow the path behind you to a tree surrounded by braziers. Approach the tree and you will be suddenly find yourself in a green tunnel; follow it north to be transported to a fenced area surrounded by trees. Press both switches in front of you to lower an Ethereal Crossbow and a Quiver of Ethereal Arrows, then climb the steps to another teleporter. You will be sent to a chamber containing two iron liches; kill one of them and you will automatically be sent to a hedge maze.

To escape the maze you must find five switches that will lower the bars blocking the exit; as you move, watch out for nightmares which can only be seen and injured when they get into melee range. The turnings you will need to make are provided below, but use the automap if you get lost. Alternatively, following the right-hand wall will eventually lead you around most of the maze.

After leaving the maze, head straight forward and try to open the gate ahead, which will send you to another tunnel ending with a white light. Head towards it until you find yourself in an area with three water-filled tunnels. Slay the sabreclaws approaching from the west, then go down the south tunnel and round the corner into a dark room. As you enter, five pillars will lower in front of you to release undead warrior ghosts. After slaying them, press the switch in the west alcove and then enter the teleporter in the north-east corner to return to the central area.

Take the north tunnel this time and follow the corner to a room with six passages. Most of the passages have hidden teleporters which will send you back to the start of the room; take the second passage from the left then the third passage from the right, and press the switch at the end. Return to the central area and head down the west tunnel where a barrier has lowered, and follow it until the scene changes again.

You will be on a path with blue candles on either side; a Torch may be needed if the passage is too dark to see. Walk between the candles (stepping outside them will drop you into an inescapable pit) until you reach a lit chamber, then head east or west and follow the passages round to another lit chamber, then head north down some steps into a dark tunnel which contains more nightmares (if you are using a Torch, it will reveal nightmares even if they are out of range). Turn left at the junction ahead, then right at the next junction and left at the junction after that. Follow the passage here and you will be teleported yet again.

You will be in a fenced outdoor area facing a maulotaur; use the ammo pickups in the corners of the arena to help you destroy it. Once the maulotaur dies a teleporter will lower by the western fence; step into it and follow the tunnel to a white light, sending you to a square chamber. Turn around and press the switch here to rise into a cross-shaped room.

Go into the east tunnel and throw the switch at the end, which will lower the bars blocking the other passages. The passage you use will decide which hazards you face.

Regardless of which path you choose, you will find yourself in another dark area surrounded by candles. Head straight forward, watching out for three nightmares blocking the path, and you will be teleported back to the starting area. A wall has opened on your right, leading to a trident symbol guarded by four more nightmares. Follow the fence round until you find an opening, and step on the trident to finish the level.

The hedge maze contains several pickups if you are prepared to explore, including a Dragon Claw which can be found by the third switch in the directions above.

After navigating the first dark path with candles, you will descend some steps into a tunnel. Go straight ahead instead of turning left at the first junction; the passage will lead you to a Hellstaff. Watch out for two nightmares which are released from a nearby alcove.