E2M3: Rec Facility is the third map of The Shores of Hell in Doom the Way id Did. It was designed by Captain Toenail in the style of Tom Hall and Sandy Petersen. The par time defined in the DEHACKED lump is 1:00. 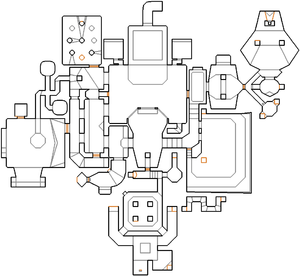 Map of Rec Facility
Letters in italics refer to marked spots on the map. Sector, thing, and linedef numbers in boldface are secrets which count toward the end-of-level tally.

Emerge from your starting point to find a shotgun and large room with a number of places to go. There are two paths to the west and one to the east. Take the east path and head east to the door on the far end near the nukage. Go through here and take the left path to a room with various monsters including a baron of Hell. Behind the northern structure is the blue key. Leave this area and head for the blue door which is in the north path on the west side of the main room. This room has several columns, so go to the northernmost one and on its northern side is a switch. This lowers several columns in the room revealing monsters and the red keycard. Grab it and head for the exit, which is through the south path on the western side of the main room. Go towards the door but turn left. The red hallway has the red door to the exit switch.

There is a blur artifact in the water north of the starting point.

The two northern rooms to the west and east in the starting room have a few supplies in them.

To get a chaingun, take the east path and then climb up the stairs to the south. You will end up in the room overlooking the big room. The chaingun is on the computer.

To get the rocket launcher, take the north path on the west side, ignoring the blue door and going through some small tech vents. You can find a chainsaw in one of the side rooms here. Otherwise head straight and the rocket launcher is behind the column on the platform. Do not drop down before you grab it, otherwise you will have to go around again.