E2M3: Refinery is the third map of The Shores of Hell in Doom. It was designed by Tom Hall and Sandy Petersen, and uses the music track "Intermission from DOOM". The par time is 1:30.

On the SNES version of Doom, this level contains the secret exit leading to E2M9: Fortress of Mystery. 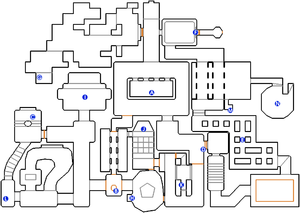 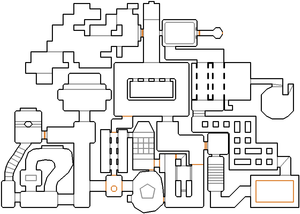 You begin facing a cage (A) which contains one or more cacodemons. Go behind the cage to see two passages leaving the room to the south, and enter the right-hand passage. You will arrive at a nukage room with two rows of tan partitions, beyond which is a shotgun on a round pedestal with scrolling sides (B). Run straight through to the shotgun.

Turn right (west) into a green marble hall. Take the right and then the left to come to a metal UAC door. Behind this door is the blue keycard (C).

Return to the cacodemon cage area and take the left-hand passage (southeast) this time. As you turn into this passage, you will see a blue UAC door (D). Go through this door and follow the passageways. Eventually, you will come to a dark room (E) with many square green pillars. Zig-zag your way northwest until you come to a room overlooking another nukage area.

Run straight through the nukage, heading north. Turn left and follow the passageways to the exit door (F).

The backpack can sometimes be grabbed through the back wall of the secret area (sector 96).

At the north end of the oblong room, a slime trail can be seen in the form of a discoloration of the "intestinal" floor texture (see screen shot below).

The blockmap bug may be triggered by firing into the cacodemon cage at a sharp angle.

For a straight speedrun, the shortest route seems to be:

A slightly shorter route is to skip the plasma rifle altogether and run straight to the blue key; this has been used in a submission to Compet-n. [1] This requires the rest of the map to be completed with the shotgun only, however, increasing the difficulty level.

The total time of a UV speed run hinges on how well the player can conserve cells. The current record holder proposes that, with luck, the area just beyond the blue door can be navigated with a single shotgun blast: push the rightmost lost soul out of the way, and rely on P_Random to shift the zombies toward the west wall of the passage. [2] [3] If nothing else, killing the final spectre with a slower weapon increases the chance of being plugged in the back. [4] (In the NM speed style, with its doubled ammo pickups, such concerns are less apparent.)

In the dark columned room, many Compet-n entries use the strategy shown in the figure. The obstructing imp ideally should be killed with the shotgun: using only a single hitscan attack, instead of several projectiles, can make the difference between colliding or not colliding with the imp before he hits the ground. [5] [6]

At the start point, there is enough room to dodge the imps without first feinting to the back corner. [7] Fire a bullet or two anyway, so that you can wallrun to the blue door without bumping into dormant troopers, and to encourage the lost souls in the dark columned room to gather in the lower corner out of your path. [8] [9] Similarly, some players shoot the last cacodemon to create more clearance at the opposite wall of the corridor, but it is not necessary. [10] [11]

Some players make a point of overshooting the plasma gun staircase in order to fake out the lost souls, although this seems ineffective with the -fast parameter. The level has been completed in both the NM speed and UV pacifist styles without the blue armor.

Modern maxkills entries begin by going straight to the green armor, emptying the chaingun into the surrounding crowd, then picking up the berserk pack and using it much more often than not (the ratio of ammo to monster health is 0.749; compare this to MAP02 of Plutonia, at 0.814). On your way from the blue key to the blue door, revisit the start area to finish off the chaingun room and to kill the caged cacodemons. [12]

Although it is not necessary to pick up the backpack to register secret #1, take it anyway in order to kill one more cacodemon with the plasma gun. [13] Moreover, accurate aim with the fists and plasma gun saves extra time by obviating the short detours to all three shell boxes. [14] Some players believe that, if the chaingun must be used at all after obtaining the plasma gun, it should be confined to the corridor behind the blue door. [15]

As a final tiny optimization, pick up the radiation suit on the way out of the chaingun room, to avoid having to wander around in search of a health pickup near the end.

In the NM100S style, the obvious detours to the secret sectors are the fastest: after taking the blue key, stay in the vine-covered area long enough to poke your head into secrets #1 and #2. With luck, nearby monsters may knock against the secret doors during infighting, causing you to spend less time passing through them. [16]

UV -fast recordings tend to be slower than UV max recordings, because punching the baron is suddenly not a great idea. [17] One therefore turns to the plasma gun in that room, thus increasing one's overall shotgun usage.

With respect to UV max runs, UV -respawn runs are generally optimized by neglecting the large monsters, who simply take more time to kill than humanoids and demons, and then either

The first strategy seems to benefit from killing all of the imps in the dark columned room, just in case. [18] It is also possible to save time overall by clearing the baron room twice instead of pausing near the exit, provided you can knock out the barrels from the far end of the hallway in one shot. [19]

UV Tyson runs use the same basic plan as UV max runs, skipping the plasma gun and the second radiation suit to save time. Usually, the soul sphere is still obtained because the final cacodemon goes down much sooner at point-blank range. The fastest recordings let infighting play out in the chaingun room while the player obtains the key, and use bullets only on the caged cacodemons (clearing the entire southwestern area should build up enough stock for this). [20] Anders Johnsen, among others, has advocated going to the key via secret #2 and returning through the slime room. [21]

UV pacifist recordings tend to follow the UV speed route, excluding secret #3. Many players keep shooting the wall every now and then, in hopes of extracting the spectre from the last room in advance (although the doortrack may stall him on the threshold). Staying quiet in the green marble hallway seems to help you in the key room: squeeze past the first demon, absorb the initial blow, and then lunge for the key, causing him to crash into the central column and leave a clear path to the door. [22] In the dark columned room, it may be much safer to push past the deaf lost soul, who does not necessarily assault you the moment you enter melee range, than to challenge an imp with his clawing attack. [23] At the exit door, the small region behind each short column can make it easier to dodge everyone until the last spectre finds his way into the room. [24] Adam Williamson has suggested that luck plays a large part in the very fastest runs, including his onetime Compet-n record wherein the sergeant fires at him and misses cleanly. [25]

According to Sandy Petersen, Tom Hall designed the room with the rising and falling pillars to test out the Doom engine's new features. Originally, Hall used a metal texture for them, but when Petersen redid the level he changed it to Hellgrowth for dramatic effect.[1]