E2M3: The Deimos Complex is the third map of The Classic Episode wad. It was created by Jan Van der Veken with edits by Anthony Soto and uses music track "Kitchen Ace (And Taking Names)". 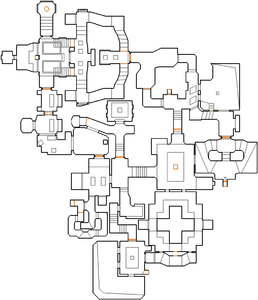 Map of The Deimos Complex
Letters in italics refer to marked spots on the map. Sector numbers in boldface are secrets which count toward the end-of-level tally.

Two alcoves to your left lead to the optional area and going north to the door is too early yet. Head straight west by descending on the stairs. Head to a computer room and go through the wall lamps between. Head left and directly proceed until you come to the dead end with the yellow key. Some monsters will teleport in and several alcove traps will open. Also, the floor in the eastern corridor here becomes nukage pool. Backtrack to the computer room and go back to the area with staircase you have descended earlier. Open the yellow door north.

There is a blue room in front of you. Head left along the corridor and press the green button. Walk into the blue room to find the red keycard unlocked. Now leave this place through the yellow door and return to the computer room and open the red door. By walking on the nukage get to the storage room in the west. Open the red door at the far end. Go left into the alcove and turn around. Flip the lever on the pillar to open the northern door. Walk into this door to find the blue card inside.

Backtrack and use any staircase. Go pass the wall lamps either in the north or south and get to the room with red door. Enter the door and use either tunnel in the south or east. Each tunnel leads you to the tan walls computer room. Head into the south eastern alcove (which was previously closed). Go up on the stairs and open the blue door. Proceed straight towards the door and press the switch inside.