E2M3: The River of Fire is the third level in the Hell's Maw episode of Heretic. 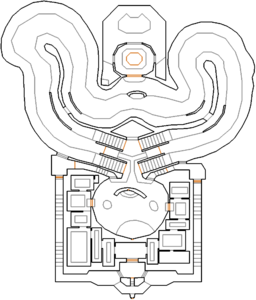 Map of The River of Fire
Letters in italics refer to marked spots on the map. Sector, thing, and linedef numbers in boldface are secrets which count toward the end-of-level tally.

The first part of this level is like a two-lane racetrack with a molten lava median. It does not matter where you begin to proceed. If you start by entering either set of steps on the inside lane, the wall section behind you will open containing weredragons. For now, follow both the inside and outside lanes clearing the area of beasties. You will have to cross the narrow lava channels to get on the outside lane. There are plenty of goodies sitting in the lava, including a Ring of Invincibility and a Silver Shield at the base of the lava cascades. Enter the cavern with the blue doors and make a run for one of the small islands. You need to press the switch on the platform to the south. This will open two narrow corridors to either side of the entrance to this room. Both rooms contain a disciple of D'Sparil. The western one has the yellow key and the right one a Tome of Power. Proceed to the yellow door that is located north of the outside track.

Go inside and get the green key. Wall sections east, north and west will open revealing weredragons. Be careful on the ice outside and remember that the grey sludge will hurt you. Quickly get the Quartz Flask and the Wings of Wrath. Now head for the green doors; either one - they both lead to the same place. Proceed up the stairs. Destroy the monsters in all the three sides of the corridor before doing anything else. Then head back to the southern end and take out the disciples of D'Sparil in the cell. Get the Tome of Power and the Shadowsphere and press the switch. Now head back to the cavern with the blue doors. The blue key is accessible now.

Press the switch behind the key and return to the lane staircases. The lava cascades between the staircases have lowered providing access to the game's most powerful weapon, the Phoenix Rod. Take the weapon from the western cascade and the Mystic Urn from the eastern one. There are also Flame Orbs there, the amount of which being dependent on the skill level. Next, head for either one of the blue doors. They hide a series of plateaus with molten rock pools. Make your way up, collecting goodies and taking out beasties. A niche on the right side of the northwestern plateau contains a Hellstaff. The northeastern plateau contains a Chaos Device. The southeastern plateau contains a Bag of Holding, Greater Runes, an Enchanted Shield and an Inferno Orb. You may want to collect the shield only when you are ready to leave. Make your way to the top and go through the door. Exit the level.

E2M3 is Heretic's first level where you can find a Firemace. If the weapon has appeared, you can have it at one of three different locations. In order of appearance, the places are:

If the Firemace did not appear, the next chance to obtain it is either on E2M9 or E2M6.

MAP15 of Alien Vendetta uses the same music track as this level.