E2M4: Cold Feet is the fourth map of episode 2 of Heretic Treasure Chest. It was designed by Lord Z and uses the music track "Infinite" from TNT: Evilution, created by Tom Mustaine. 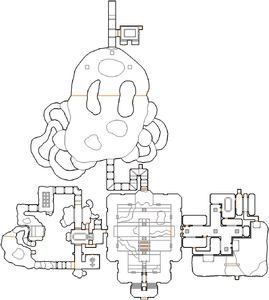 Map of Cold Feet
Letters in italics refer to marked spots on the map. Sector, thing, and linedef numbers in boldface are secrets which count toward the end-of-level tally.

As the level starts, look right to see an Ethereal Crossbow in front of three locked doors, which lead to the exit. You can collect the keys in any order.

Drop to the ice below and head north through a gold door; the water will carry you to a fast-flowing pool guarded by nitrogolems and (depending on skill level) undead warriors or ophidians. Head north until you walk over a waterfall (there is a Tome of Power between the ice columns) and slay all the enemies that teleport in, then enter the tunnel and go through the door on your right to find two more warriors guarding a switch. Press the switch and kill the four golem, nitrogolem or warrior ghosts that are released to your right, then press a second switch in the south-west corner to reveal the yellow key and a teleporter leading back to the hub.

Use the lift on the east side of the hub to reach a door and pass through it to enter a bronze hall, then go through the first door on the right to confront three golems. Go through another door between two small pillars and follow the passage to a switch guarded by two more golems and a sabreclaw, then return to the hall and go through the south-east door that has just opened to get outside. Slay the waiting gargoyles and nitrogolems then head north to a door (guarded by an iron lich on hard skill levels) and follow the passage behind it to another switch; watch out for the walls opening on either side to reveal gargoyles (and disciples of D'Sparil on medium or hard skill levels). Press the switch then go back outside and head south and west, crossing a bridge to reach the green key.

Use the lift on the west side of the hub to reach a door and pass through it to confront a disciple, then head through two more doors to reach a chamber with nitrogolem ghosts. Open the north skull door and follow the passage behind it to a lift that will take you down to a dark tunnel with gargoyles. Follow the tunnel west, collecting a Dragon Claw on the way, until you reach a metal bridge guarded by gargoyles and undead warriors then press the switch on the far side of the bridge to open the door next to it. Destroy the sabreclaws waiting behind the door and follow the passage to the blue key, then continue on to a cavern with weredragons; from here you can continue east past some gargoyles to a set of bars, which can be opened using the nearby switch. Go through the bars and press another switch to lower a lift, ride this up then head north to return to an earlier room. On your way back to the hub, you will have to contend with three ophidians (replaced by an iron lich on hard skill levels).

With all three keys, return to the hub and use the lift on the north side of the central platform to get back to the start point. Open all three locked doors and climb the door behind them to another door; the switch behind this last door will take you to E2M5: Necropolis.

Refer to secret #4 below for information on reaching the secret exit to E2M9: The Temple Of The Elements.

From the start point, drop down to the ice then go to the east side of the staircase leading to the exit door to find Gauntlets of the Necromancer.

After you reach the large pool on the north side of the level, enter the icy tunnel on the west side and go as far west as you can to find a Hellstaff.

As soon as you pass through the east door from the hub, go through another door on your left to find a storeroom with a Dragon Claw and some fire gargoyles.

After collecting the blue key, the passage will lead to a cavern with some weredragons. There is a door here which requires the yellow key; behind it is a switch that will close an alcove by the entrance to this area containing ophidians or an iron lich, which opens when you enter the cavern. As the alcove can only be opened and closed once, using the switch may cause you to miss out on 100% kills.

* The vertex count without the effect of node building is 2639.