E2M4: Command Center (M_ICY666.WAD) is the fourth map in episode Descent to Darkness of ZPack. It was designed by Icytux and Tuxido666, and uses for music track a remix of "Bye-Bye American Pie" from Doom II originally composed by Robert Prince. The par time defined in MAPINFO is 13:00. 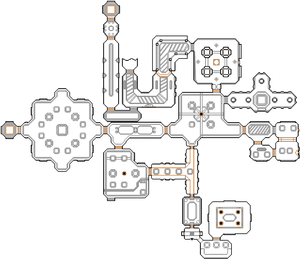 * The vertex count without the effect of node building is 3202.