E2M4: Derelict Vessel is the fourth map of episode The Depths of Doom of No End In Sight. It was designed by Xaser. 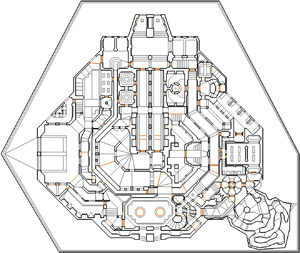 Map of Derelict Vessel
Letters in italics refer to marked spots on the map. Sector, thing, and linedef numbers in boldface are secrets which count toward the end-of-level tally.

Go through the door and turn left, following the blue-floored hallway south until you reach two shotgun guys guarding the blue keycard - the lights will dim as you go round the last corner. With the blue key, turn round and follow the hallway north, passing two spectres that have teleported in, until you reach some steps leading up to a blue key door. Go through this door and turn left to kill an approaching demon then climb the steps and go through the door to the cockpit area. Pass through the first door on your left to reach a large hallway at the middle of the level, then step through either of the doors on the left-hand wall to enter a room with imps, zombiemen and lost souls - as you enter the room the red keycard in this room will lower for a few seconds, so quickly step down to the bottom floor to grab it.

Go back to the cockpit area and head through the west door in the south wall to enter another long hallway, then follow it to the red key door at the opposite end - as you approach the door the lights will dim and you will be ambushed by some spectres and other monsters. Go through the red door and follow the stairs down until you reach a Y-shaped opening that is guarded by a baron of Hell - kill it along with the monsters that teleport in from behind the Y, then step through and press the switch next to the platform to lower it, revealing a room with two fiery columns. Head south past another baron and climb a curved staircase then follow the passage round to a UAC door.

Open the UAC door and follow the passage to a second door, then step through to a chamber with three bridges and press the skull switch ahead to open it as well as another switch on the left - pass through both switches and head through another door, then flip a switch at the bottom of some steps. Backtrack to the UAC door and turn left, where a wall has opened ahead to reveal a second switch - flip it to lower the floor below you and reach a button which you should also press. Go through the UAC door again and retrace your steps to the first switch you flipped to find it has been replaced with an eye switch - press the switch to lower a nearby window, then step through this window to be teleported to a small room with lost souls.

Do not stay in this room for too long as the floor is damaging; instead, follow the passage south-east past some platforms that lower until you reach a lift ahead (you can lower it for a megaarmor), then turn left to go through the UAC door again. Two fleshy passages containing demons and lost souls have opened on either side of the hall - enter the south-east passage and follow it east and north until you climb some steps and drop down a hole. Go through the exit door in front of you and press the skull switch behind it to open the way forward as well as another wall on the right - step through this wall to finish the level.

From the cockpit area, head through the door in the west wall to the neighboring room then head south into a narrow passage with a gray floor - follow this passage and step through the second door on the right to find a chaingun. Continue following the passage south and east until you reach a cacodemon guarding a door, then step through this door to a wider hallway with a tan floor. Follow this hallway until you see two sets of steps leading up to a door and go through it, then turn right and push past some monsters to a switch that will raise a staircase visible through the nearby wall. Continue following the tan passage to that staircase and climb up it, then head west past three walls that lower to reach the yellow keycard.

Once you have the yellow key, it can be used to open two doors leading to optional areas.

On the west side of the level is a conveyor-like floor with a platform that moves up and down. Ride this platform up to the next floor and follow the conveyor all the way to the end to find a switch; flip it then head back to the moving platform, watching out for three crushing ceilings. As soon as you return to the moving platform, climb the blue staircase on your left and go through it to enter a room with a supercharge.

* The vertex count without the effect of node building is 3129.