E2M4: Enclave is the fourth map of Cleimos. It was designed by Rand and Steven Phares.

It was adapted into MAP06 of Cleimos 2. 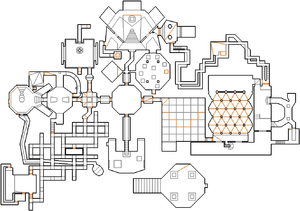 Map of Enclave
Letters in italics refer to marked spots on the map. Sector numbers in boldface are secrets which count toward the end-of-level tally.

To get the blue key, go west from the central octagonal room, down the lifts and along the corridor to the north. You will enter a room with some shotgun guys and a berserk to the south. Getting the berserk opens up a corridor to the north leading to a teleporter. This teleporter takes you to the blue key room. The switch in the south of this room opens up a door back to normal territory.