E2M4: Going Down (Masters of Chaos)

E2M4: Going Down is the fourth map in the Hellbound episode of Masters of Chaos. It was designed by Doom_Warrior and uses the Hexen music track "Octo". 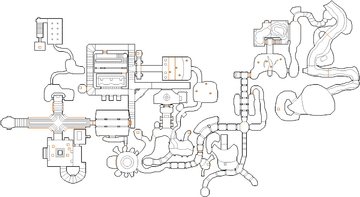 Map of Going Down
Letters in italics refer to marked spots on the map. Sector, thing, and linedef numbers in boldface are secrets which count toward the end-of-level tally.

Step onto the round gray floor in front of you and it will start to descend. As you go down a number of alcoves will be revealed around you holding golems and nitrogolems, so fight them off. When the floor finally reaches the bottom, head east and collect the Ethereal Crossbow, then turn left and head forward to a fork in the tunnel guarded by dark bishops and sabreclaws. Take the left-hand fork and step into the teleporter here.

You will arrive in a long stone hallway. Dispatch the sabreclaws, ophidians and reivers ahead and go to the end of the corridor, then turn right and follow the passage until you go round a corner. Go forward until you see a silver door on the left and go through it, following the walkway round a lava pit until you pass through a doorway. Turn left and slay the nitrogolem ahead (or golem on easy skill levels) and head down the hallway, taking the Discs of Repulsion on the way.

Turn right at the end of the passage and go through the doorway to the chamber with the blue key; as you enter, the bars ahead of you will lower and three walls behind them will lower to reveal bishops. Dispose of them and the gargoyles guarding the blue key and pick it up.

With the blue key, drop off the ledge and go through the bars that just lowered, turning left and then right at the junction ahead. Follow the hallway here to its end and open the door on the right. Step through the door and immediately step back; the walls in the next room will lower to reveal bishops and green chaos serpents, joined by ophidians on easy skill levels or iron liches on medium and hard. Going into the room lowers a ceiling behind you to seal you in, so stay behind the door and use it to give you cover.

Once the enemies are dead, go west across the room and open the door at the end which is flanked by blue key gizmos. You will enter a cross-shaped hallway - dispatch the reivers ahead then turn left at the intersection. Destroy the sabreclaws and nitrogolems in the room ahead, then go south through the room and climb the curved staircase at the end. Head forward through a doorway to enter a room with two caged disciples of D'Sparil - take the Map Scroll in this room before pressing the switch in the east wall.

Backtrack to the cross-shaped hallway, watching out for bishops that have been released into the room below, and head north at the intersection. Go through either of the now-open doors here and slay the two reivers in the room behind, then go through another door in the north wall. Follow the tunnel to another chamber with three more reivers, then head north through a second tunnel to a pillared room containing nightmares.

From this room, go north-west into a lit passage and turn left to see a staircase with one or two undead warrior ghosts. Dispose of them, then go down the stairs and take the green key sitting on a teleporter. You will be returned to the tunnel at the bottom of the floor that descended at the start of the level.

Turn right and follow the passage, leading through several wooden supports to a door. Prepare your weapons and go through the door, as heading through it lowers a wall ahead of you to release several sabreclaws. Continue following the passage until you reach a T-junction and turn left to see another passage with supports; watch out for undead warriors hiding in alcoves on either side and one or two weredragons up ahead. At the end of the passage, turn right and open the door flanked by green key gizmos.

The next room contains fire gargoyles, joined by three weredragons on easy or medium or a Bormereth on hard - defeat them and head through the north doorway, watching out for the inescapable lava pit next to it. Open the left-hand door and defeat the enemie behind it, then press the switch in the north wall. Four pillars will lower in the room to release sabreclaws on easy skill levels, or undead warriors on medium or hard. Return to the previous room (with the lava pit) and go through the east door which has now opened.

Turn left and follow the passage into a low tunnel, watching out for a wall opening ahead of you to release more enemies. Turn right and dispatch the sabreclaws blocking the path, then take the Hellstaff at the end of the tunnel before arriving at a magma stream. Follow the lava stream south, watching out for numerous enemies including reivers, chaos serpents and a Bormereth on the way.

Eventually, you will drop down a deep hole to a passage with a lava stream; this is highly damaging so you may want to prepare healing items or a Ring of Invincibility. Head west and drop into a large lava pool populated by reivers and bishops. Head west on to solid ground and press the switch in the west wall, which will lower the walls on either side to reveal disciples. Go through either of these walls and follow the tunnel to the exit teleporter, which is guarded by three ophidians on medium or hard skill levels.

From the bottom of the starting area, head north-east up the passage; a wall will open in front of you to release two sabreclaws. Head east from here and step over a waterfall, then head south into a dark tunnel ending with a Shadowsphere and other items, guarded by an undead warrior (plus a sabreclaw on medium or hard.)

From the area above, head north to a lift and ride it up, then go through the stone door ahead to enter a room with a red and gray pillar (holding secret #2 below). East of the pillar is another lift leading to a Skull Staff.

In the cross-shaped hallway past the blue key door, head west to find a Frost Fang in the middle of eight small pillars.

From the T-junction leading to the green key door, turn right and follow the tunnel all the way to the end to find a Firemace and two Skull Staff Charges.