E2M4: Med-Labs and Operations is the fourth map of Aliens TC. It was designed by Justin Fisher.

The map's subtitle on the intermission screen is Escape from med-labs. In automap mode, the title is given as E2M4: Med-Labs. 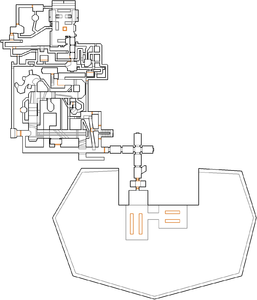 Map of Med-Labs and Operations
Letters in italics refer to marked spots on the map. Sector numbers in boldface are secrets which count toward the end-of-level tally.

In the trap at the start point, some aliens invariably get stuck above the ceiling. They can hit you in melee, but you can't attack back. (It is still possible to get 100% kills by patiently waiting for eggs to hatch.)