E2M4: Mental Ward is the fourth map of The Shores of Hell in Doom the Way id Did. It was designed by Jacob Zuchowski (ellmo) in the style of Tom Hall and Sandy Petersen, and hosts the same eerie atmosphere as the original E2M4. The par time defined in the DEHACKED lump is 3:00. 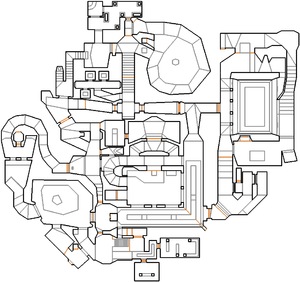 Map of Mental Ward
Letters in italics refer to marked spots on the map. Sector, thing, and linedef numbers in boldface are secrets which count toward the end-of-level tally.

Climb the stairs to your left. The blue torch here indicates a fork where you can head left or go straight. Go straight at the fork to a big hall with another fork. Going left will not lead you anywhere without a key so go right through the large hall, going around the bend overlooking the starting point. When you go behind the square metal column, you will come across three doors and a switch. The north door can be opened directly, leading to a hall with monsters and a couple of colored key doors. Ignore this path for now and hit the switch to open the door directly behind you (the other door cannot be opened yet). In this room is a nukage pool. Take the path outlined by green torches to a switch and a teleporter. Before you take the teleporter, hit the switch. The switch you pressed raises some stairs though, so make sure you climb those, open the next door, and grab the yellow key. Grabbing it drops you right outside back to where the three doors are. Now take the north door and find the yellow door at the end of the hall. Alternatively, you can go down the end of the large hall to the two key doors instead, the yellow door will be on your left if you choose that route.

Whichever path you chose, get into the middle hallway with the blinking lights. Going north to where the baron of Hell is, turn right and follow the stairs upwards. You will find a switch, press it and go back and the door should be open. When you enter the next room, you will trigger the lift on your right to move up and down. Ride it up, and go right and down to get a red skull key. Exit through the yellow doors on the right, and then head straight across to the red doors to reach the next area. There is another set of red doors in the big hall on the right wall if you want to pick those. Either way, the red door should take you to another large hall. Go to the north end of the hall which has a lift. You need to press the right lion switch here (the one that is lit) to lower the lift. When you do that, head right and then down the stairs all the way to the room with the table. Flipping the switch here opens up a wall of spectres to your southeast, but also a wall in the previous hall allowing you to get a blue skull key in the blood. With this key, backtrack all the way to the blue door, which is in the hallway taken by the north door in the small area with three doors and a switch. Follow this winding hallway to the exit.

To get the armor you saw at the starting point, head left through the passage and when you reach the next room a lift makes a sound. Go back to the blue torch quickly and drop down to obtain the armor. You can also jump on the crate for a box of shells and go west of the armor to find a rocket.

At the fork, if you go left and take the door, you will find a room with two shotgun guys, some health bonuses, and a shotgun.

On the other side of the teleporter close to where the yellow key is, there are some supply rooms if you traverse the water, one of which contains a chaingun.

Head into the hallway with blinking lights beyond the yellow key doors. On the first left in the hallway is a small aside with a few side rooms containing lost souls in them. There are a few supplies if you want them, including a berserk pack.

In the room just before the lift that leads to the red key, if you climb the stairs there, you will find a plasma gun.