E2M4: The Evil Base (The Classic Episode)

E2M4: The Evil Base is the fourth map of The Classic Episode. It was designed by Jan Van der Veken and uses the music track "Waltz of the Demons". 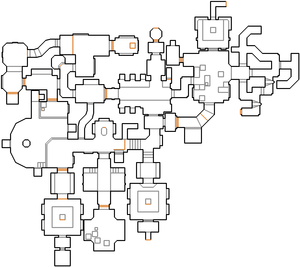 Map of The Evil Base
Letters in italics refer to marked spots on the map. Sector numbers in boldface are secrets which count toward the end-of-level tally.

Head straight through the door and go past two gargoyle decorations. Go left and turn around. Open the door. Enter the computer room and kill the disturbing monsters. Leave this room and re-enter. Doing this will raise up the platform in the middle of the room. Go around this platform and press the button. Backtrack through the door and notice an alcove tunnel leading north. To the right, you can see the red door. Turn left and advance to the grey brick room. Walk on the nukage and into an alcove. In another brick room, open the eastern door. Inside, open another one. Have the red keycard.

Now, backtrack to the red door (the fastest way is to drop down into the nukage pool and take the radiation suit for safety and walk upstairs, then return into the alcove). Open the red door. Get to the other end of the outside area. When you find yourself in the cargo room enter the eastern fork room. Take the southern way, turn right and in the dead end press the button. Backtrack into cargo room and take the northern open way. Take an alcove at very north and press the switch. Grab the blue card on the freshly lowered stand.

Backtrack into cargo room and then into the outside area. Take the exit door north. Eliminate the shotgun guys inside and flip the switch.

The level was originally released as a standalone WAD titled Doom Classic 1: The Evil Base. It was uploaded by Jan to the idgames archive in July 1998, three years before the full episode was completed.