E2M4: The Ice Grotto is the fourth level in the Hell's Maw episode of Heretic. It uses the music track "Build".

This level contains an exit to the secret level E2M9: The Glacier. 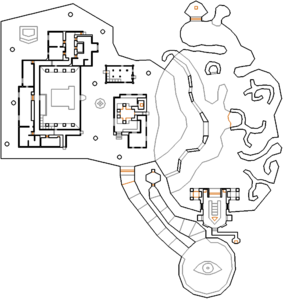 Map of The Ice Grotto
Letters in italics refer to marked spots on the map. Sector, thing, and linedef numbers in boldface are secrets which count toward the end-of-level tally.

This map consists of an ice area and a cave area, which are separated from each other by a large wall.

Step forward on to the ice and kill some gargoyles on your right, then head due south until you reach a Morph Ovum next to a lava river - watch out for weredragons patrolling the ice, and for disciples of D'Sparil firing at you from the top of the large wall to the west. Enter the alcove on the east side of the river to find an Ethereal Crossbow being guarded by a fire gargoyle, then continue south past more weredragons while noting the openings in the wall on your left. Go into the second opening to reach a fork; the left path leads to a Bag of Holding while the right-hand path leads to the yellow key, which is guarded by a weredragon on thou art a smite-meister and black plague possesses thee skill levels.

Go to the brick building on the south side of the ice area and open the yellow key door here, then go up the steps to find a Phoenix Rod guarded by a few gargoyles; taking the weapon will open two closets to your left and right containing more gargoyles along with Flame Orbs, and lower a teleporter in the north-east corner of the room. Enter the teleporter to get on a tower on the west side of the building, where a Tome of Power is guarded by a disciple, then drop down to the ice and go back inside the building to find that a second teleporter has lowered in the north-west corner. This teleporter will send you to the east tower where you can collect the green key - with this key, go back to the starting point and open the large door between the green gizmos to find one or two weredragons guarding another teleporter.

The teleporter will put you on top of the wall dividing the two sides of the map. Drop down the west side of the wall to land in a cave with three large buildings guarded by various enemies, then go to the middle of the cavern to find a blue fountain with a Torch on it. Next to the plinth is a doorway leading into the main hall of the western building; after going through, head up the steps in the south-west corner to reach a balcony overlooking the hall then go through the doorway here to enter a long corridor. Follow the corridor south until you reach a Map Scroll guarded by a weredragon, then open the nearby door to find two or three gargoyles protecting a switch.

Press the switch then leave the building and head across to the east structure - doors on the east and south sides of this structure have opened, allowing you to go inside and collect the blue key which is guarded by a few gargoyles. With the blue key, leave the structure and head due south to a blue key door, open it and follow the staircase past one or two sabreclaws to a circular chamber with an eye motif. Take the Hellstaff sitting on the eye and use it to destroy the iron lich and any gargoyles around you, then go north up another staircase to reach the exit door. Kill a disciple waiting behind this door then enter the gray teleporter to move on to E2M5: The Catacombs.

Refer to secret #2 below for information on reaching the secret exit to E2M9: The Glacier.

Head around the east side of the Phoenix Rod building to find a niche with Gauntlets of the Necromancer, along with a Shadowsphere on bringest them oneth skill level or lower.

Search the rooms on the west and north sides of the western building in the cave area to find various items, including a Chaos Device, an Enchanted Shield, Timebombs of the Ancients and another Shadowsphere.