E2M5: Atmospheric Processor is the fifth map of Aliens TC. It was designed by Justin Fisher, and contains a secret exit to E2M9: Alien Host Ship.

The map's subtitle on the intermission screen is Retreat to landing pads. In automap mode, the title is given as E2M5: Operations. 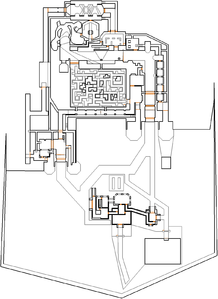 Map of Atmospheric Processor
Letters in italics refer to marked spots on the map. Sector, thing, and linedef numbers in boldface are secrets which count toward the end-of-level tally.

The secret exit is located to the west of the normal exit, and is accessed from the central building via a yellow door (there is a yellow key inside the building).

Four sectors are marked as secret: (sector 233), (sector 293), (sector 301), and (sector 316). However, none of these have any sidedefs, so do not actually appear in the level, thus the maximum obtainable secret percentage is 0%.

As the secrets in this map can not be activated without cheating (see secrets), a NM100S run for this map is redundant. Other categories may ignore the secret requirement in this case.

* The vertex count without the effect of node building is 1704.

During development, this level became so large that it was split in two, the other part being E3M1: Bonus Level.