E2M5: Badlands is the fifth map in the Hellbound episode of Masters of Chaos. It was designed by Caleb26 and uses the music track from Heretic's E2M7: The Great Hall.

This level contains a secret exit to E2M9: Charnel House. 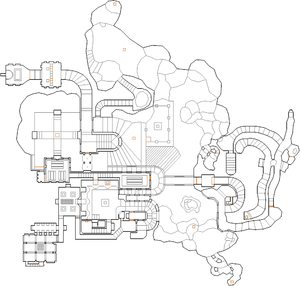 Map of Badlands
Letters in italics refer to marked spots on the map. Sector, thing, and linedef numbers in boldface are secrets which count toward the end-of-level tally.

In the next room, turn left and left again to go through a doorway and kill the undead warrior ahead. Go through the doorway it was guarding into a yellow room, then cross the room and go through a narrow opening in the south-west corner. Climb the stairs here and press the switch at the top to open a door elsewhere in the level, then turn left to see that some walls to the north have lowered to release nitrogolems.

Defeat the enemies and head through the openings in the north wall to a stone room, collecting the Gauntlets of the Necromancer here if needed. Leave the room through the east doorway and turn left to go back to a previous chamber, where four metal pillars have lowered allowing you to collect the items on them, including a Silver Shield. A floor by the east wall will also be moving up and down; ride it down and open the wall behind it to get outside.

The next area contains a number of Knight Archers who fight using their crossbows. Take the Ethereal Crossbow from the platform in the middle of the area then head north-east through a doorway you opened earlier. Follow the curved staircase all the way to the bottom (past a bridge leading to the yellow key door) and turn right to go down another set of steps. You will see a metal pillar on your left with a teleporter and a platform in front of you - step onto the platform and ride it to the top, then face west and run forward to land on the pillar.

You will be placed on some cliffs to the east - turn right and follow the steps round to a weredragon guarding a switch. Press it and drop off the cliff to the ground, then head west up two sets of steps and head straight forward past some wooden columns to an open area with golems, plus an iron lich that teleports into the south-west sector. Once everything is dead, go to the south-east corner and step on the platform to be carried to a higher floor. Go through the open door ahead and turn left to find a room with dark bishops - kill them and head east through a doorway, then follow the passage to a room with a long red table. Kill the enemies and take the Firemace and Quiver of Ethereal Arrows here, then open the wooden door in the east wall and turn right to see a switch on the wall next to you. Press it, take the items here and drop off the ledge, then follow the staircase up to an earlier area.

Head south through a now-open wall and follow the staircase up to a switch. Approach the switch and the room will darken; press the switch, kill the green chaos serpents that are revealed on your right and head back down the stairs, killing two or three ophidians waiting at the bottom. Go back outside and follow the north-east staircase down to the bottom, turn right to go down the next set of steps and turn left to climb a third set. Go through the now-open door at the top of the stairs and kill the undead warrior ghost behind it, then take the staircase to the top and collect the Skull Staff in the next cavern guarded by two more warriors. Head north-west up yet more steps to get outside, then climb one more set of steps to the yellow key.

Backtrack through the passage to the large curved staircase (slaying two nitrogolems and two undead warriors which have teleported in), then head east across a bridge leading to a door with yellow key gizmos. Go through the door and step on the platform ahead (two nitrogolems will be guarding it on hard skill levels to be carried up to a tunnel. Follow the tunnel up a curved staircase and destroy two more nitrogolems on the way to a windowed area. Turn left at the top of the stairs, go round the corner and up another set of stairs to find one or two undead warrior ghosts guarding a stone door. Go through it and follow the tunnel, watching out for weredragons ahead, until you see an opening on your left with hanging skulls. Go through this opening and head north to another staircase, which leads up to a switch guarded by an undead warrior.

Press the switch and head back to the opening with hanging skulls; two walls have opened here to release nitrogolems, disciples of D'Sparil and a weredragon. Go through the opening and head north, go into an opening on your left and follow the staircases up to another switch guarded by one or two undead warrior ghosts. Press it before heading back down the stairs; at the bottom, turn left and head to the end of the passage where a moving floor leads to a switch, guarded by a disciple. Pressing this last switch allows you to reach the green key. Turn round and ride the platform back down to slay the fire gargoyles which have been released behind you, then backtrack through the yellow key door, cross the bridge and go down the curved staircase. Turn right and go down the steps to see the platform you used earlier in front of you. Ride it to the top, then collect the green key which has now been lowered.

Drop down to ground level and head south-west up the steps you just used, slaying the enemies that have teleported in. Head forward into the shaded area by the wooden pillars and go through the door with green key gizmos. Slay the waiting ophidian and Knight Archers and climb the stairs to the top, then follow the wide stone tunnel to a room with two pillars.

Press both switches on the east wall to open the way forward and lower the pillars to reveal more ophidians, then head west through the passage to a room with stained-glass windows and sabreclaws. The wall ahead will lower to reveal a Bormereth and some undead warriors - kill them all then step into the portal they were guarding to finish the level and proceed to E2M6: Abyss.

Refer to secrets #5 and #7 below for information on reaching the episode's first secret level, E2M9: Charnel House.

* The vertex count without the effect of node building is 2463.