E2M5: Cave of Damnation is the third map in episode The Badlands of HUMP mini. It was designed by Skeletonpatch and uses the music track "Build" by Kevin Schilder. 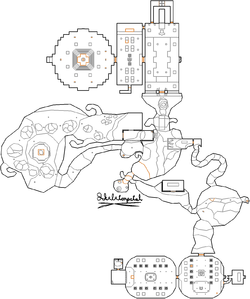 Map of Cave of Damnation
Letters in italics refer to marked spots on the map. Sector, thing, and linedef numbers in boldface are secrets which count toward the end-of-level tally.

Follow the tunnel (part of the floor will drop away behind you) until you fall into a large cave with a few golems and nitrogolems, then head north across a metal bridge to a silver building and open the brightly-lit door in front of you. Run forward to catch a platform as it starts moving up and down then open the door on your left to find yourself overlooking a room with gargoyles and a disciple of D'Sparil who are guarding various ammo pickups as well as a Dragon Claw. As you go through the west door you will see some steps leading up to the blue key lower; you must then press seven switches in the correct order to raise the steps again. The correct sequence is west, south-east, north-east, east-south-east, north-west, east-north-east and south-west - if you make a mistake, hit the blue switch opposite the door to reset the puzzle.

Once all the steps are raised, go up them to collect the blue key then fight off any enemies that teleport in before returning to the previous room, where the north wall has lowered to reveal a lift. Ride this lift up and go through the door on your right to a ledge with a pair of yellow key doors, then walk through the south fence to drop back to the hall below. Go back to the starting cave and enter the destroyed eastern building containing an Ethereal Crossbow, then go through the east door to find a dark tunnel leading down to a cavern with two or three undead warriors. Take the Hellstaff by the west wall and shoot the switch across the trench to raise a bridge, then step across and go up the steps to a door requiring the blue key. Go through the door to enter a throne room containing nitrogolems as well as undead warriors and an ophidian, then go through another door to the west to find a fountain with the green key on it. Approach the stage behind the fountain and use the dark metal tile to get on top of it, kill the undead warriors waiting behind the curtain then step through and open the door on your right to find a switch. The switch will activate four water spouts in the fountain, which you can ride up to the green key.

Go back to the starting cave and look for a lava pool on the west side; if you run north-west through the lava you will leap over a lava-fall and land on a stone ledge below. Go through the green key door here then start running west across a series of round platforms, which will eventually lead you to a ruined structure containing the yellow key along with ammo; watch out for fireballs being ejected by the volcanoes below. Taking the key causes the platforms you just crossed to sink into the lava; wait for a brown wall in the south-east corner of the lava to lower then drop down there and follow the lava until you reach a blue teleporter that will return you to the starting cavern. The bridge leading back to the blue key area has dropped, and a door next to it has opened to reveal an iron lich - go through the door and look right to see a switch that will raise the bridge again. Go back inside the silver building and use the lift to reach the area with the yellow key doors, where two or three more liches have appeared, then open either of the doors and head through to the exit teleporter.

After going through the green key door, turn right and walk between the barrels to find a Quartz Flask and a Ring of Invulnerability.

* The vertex count without the effect of node building is 3316.