E2M5: Chaos in Bloom is the fifth map in the Mount Suffering episode of Heretic Upstart Mapping Project. It was designed by ETTiNGRiNDER and uses the music track "Drive" by Kevin Schilder. 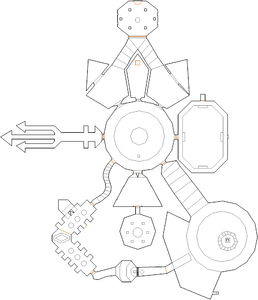 Map of Chaos in Bloom
Letters in italics refer to marked spots on the map. Sector, thing, and linedef numbers in boldface are secrets which count toward the end-of-level tally.

Step on the island in front of you to collect Wand Crystals, Energy Orbs and a Chaos Device (plus a Bag of Holding on yellowbellies-r-us (YRU) skill level or lower), then head north past an undead warrior and gargoyles to collect a Dragon Claw. At the south end of the room are Gauntlets of the Necromancer in front of a switch, which will open two doors on the north side of the room revealing golem ghosts, undead warriors and disciples of D'Sparil. Go through either door and head north up some blue steps, then open the large door at the top to enter a chamber with Energy Orbs, a Phoenix Rod and the yellow key.

Head back to the starting area, where a room to the south has opened releasing many golems and nitrogolems, then open the south-west door and head down the steps to another door that has gargoyles and undead warriors behind it. There is a large red wall at the turning that will open as you approach to reveal an iron lich along with an Ethereal Crossbow and a Quiver of Ethereal Arrows; go past the wall and fight your way past more gargoyles and undead warriors to another door, open it and move forward to find four undead warriors guarding the green key.

Go back to the starting area and head through the south-east door this time, going down some steps with golem ghosts on them to a room with a circular sludge pit which is bordered by a ring that has golems and sabreclaws on it (there will also be disciples on bringest them oneth or higher. There is a stone pillar inside the pit that has a staircase running round it; go round to the south-east side of the ring to find the bottom of the staircase, then climb up to the top to find a switch guarded by two nitrogolems. Press the switch and run south-east to land on the ring again, then go round to its south-west side to find that a bridge has risen leading to a doorway. Go through the doorway to see the blue key ahead, surrounded by four Flame Orbs.

Go back to the starting area, fighting your way past any golems and nitrogolems that teleport in, then open the east door to find an area with a flowing water pool protected by golems, as well as three ophidians on YRU or lower or eight disciples on higher skill levels. Cross the pool to reach a switch on the east wall, press it then go back to the starting area to find that the north door has opened revealing a room with two ophidians on YRU or lower, as well as many sabreclaws and two or three iron liches on higher skill levels; more sabreclaws will also teleport to the outer areas of the level and make their way to the center. Enter the room and step on the gray teleporter inside it to finish the level.

A Firemace can spawn inside secrets 1 or 4, as well as inside a chamber north-west of the starting area which opens after taking the yellow key.

After taking the blue key, you can open the door on the west side of the starting area. Behind this door are numerous items guarded by two weredragons and a pack of sabreclaws, which include a Hellstaff and two Greater Runes.