E2M5: Deep Storage is the fifth map of episode The Depths of Doom of No End In Sight. It was designed by Emil Brundage (NaturalTvventy).

This level contains a secret exit to E2M9: Castle of Illusion. 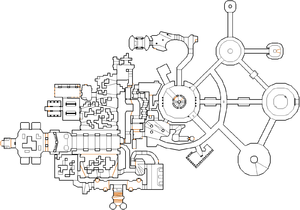 Map of Deep Storage
Letters in italics refer to marked spots on the map. Sector, thing, and linedef numbers in boldface are secrets which count toward the end-of-level tally.

Head due south through a storage area with lots of crates (you will pass a shotgun on the way) until you reach an area with a partial invisibility and an invulnerability, then turn left and head into a metal tunnel next to a sealed door. Follow the tunnel to a T-junction and turn left, then head across a room with a fleshy floor to an outdoor area with water. Turn right and right again to pass through a chamber with two tech columns, then turn left to drop down to a brightly-lit switch under a purple sign - flipping the switch will restore power to the storage area, allowing you to open the doors there.

Dispose of the lost souls that have been revealed either side of the switch then backtrack to the area with the partial invisibility and invulnerability, ready to kill a number of monsters that teleported into that area earlier. Press the switch next to the sealed door to open it, step through and follow a hallway until it curves to the right, then go through a low doorway which leads to a stone staircase. Follow the staircase to the bottom to reach a gray room guarded by a baron of Hell then head south into another passage leading to a circular room with a central tower surrounded by nukage. There are four more passages leading away from this room, but go into the north-western passage first to find a radiation shielding suit; it may be useful for navigating this area.

Return to the tower room and follow the nukage north-east to a chamber with a central gray column, then head east down another passage to a marble room containing zombiemen and imps who are guarding the yellow keycard. Take the key (the nearby column will lower to reveal a baron) then return to the tower room and go through the south-east doorway this time, turning right at the T-junction ahead and following the nukage to a room with some zombies. Press the switch in the north-east corner to open three walls on the east, north and west sides - the exit door can be found behind the west wall. Kill the cacodemon (and baron on Hurt Me Plenty skill level or higher) then open the exit door they were guarding and press the switch behind it to finish the level and move on to E2M6: Poison Control.

Pressing the switch that reveals the normal exit door will also open another wall next to the switch - behind it is a passage leading to another exit door that requires the red skull key from secret #5. Behind this door is a switch that leads to E2M9: Castle of Illusion.

South of the area with the partial invisibility and invulnerability is a second storage room. Search around the crates to find a chaingun and armor.

After flipping the switch under the purple sign, return to the area with the partial invisibility and invulnerability and head west up two platforms that are moving up and down. Collect the armor at the top then go west to a room with blue pads, which you can cross to find a supercharge. Use caution in this area - the blue pads are a damaging floor, and a number of shotgun guys will be released when you take the supercharge.

After flipping the switch under the purple sign, you will be able to open a door on the west side of the larger storage area to enter a computer room. West of this room is a chamber with health, weapons and ammo.

It is possible to become soft-locked and unable to exit the level. Acquire the blue key then backtrack through the nukage tunnel to reach the center tower, open the locked door and climb the stairs to the top; this will lower the surrounding nukage and change it to blood. If you did not press the button by the normal exit door first, which opens a doorway leading to the exit area, then you will be unable to return to that area and so cannot reach either of the exits.