E2M5: Deimos Command is the fifth map of The Shores of Hell in Doom the Way id Did. It was designed by Mike Alfredson (Use3D) in the style of Sandy Petersen. The par time defined in the DEHACKED lump is 2:45. 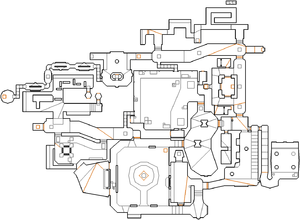 Map of Deimos Command
Letters in italics refer to marked spots on the map. Sector, thing, and linedef numbers in boldface are secrets which count toward the end-of-level tally.

Take the door on your left first. Follow the hall to a room. The doors will close behind you and trap you with monsters, but the switch will open both doors up for you. Now take the southern door and continue down the hallway ignoring the key for now until the next room. A door will open to the north revealing a baron of Hell and a megaarmor. To the south is a switch. This modifies the ground around the yellow key, so you can now reach it. When you grab it, instead of heading back to the starting point, go back to the room and there should be a nearby yellow door here. Enter this one and follow the walkway as the stairs climb up. There are two doors at the top. Do not enter the left one before entering the right. If you do, the right door will close forever and you will not access the secret exit should you be going for it. Take the right door and grab the secret. When you are done, head through the left door and take the next nearby door. In this room, take a left, and take the door here. Approaching the metal wall in this small room reveals zombies and a switch. Press it to open the central cage in the other room. Inside is the blue key. Enter the teleporter on the left to acquire it.

Now enter the northern blue door into a long hallway. Going west a bit opens an area behind you with several asides, including a rocket launcher and a secret. If you want the secret exit, make sure to find this secret. When done, use the staircase in the big hallway to enter the cargo bay area. You will be on the ledge, so from here journey westward until you find another set of stairs. Through these stairs you will find a similar hallway to the other one you crossed. On the far end of this hallway is a hidden door with a teleporter taking you to the third secret, again necessary if you want the secret exit. Otherwise, you will have to traverse the nukage here. There is a radiation suit in the room to the south, so pick it up before going. There is a fork in the nukage. If you got all three secrets and are willing to head to the secret level, take the right path and the secret exit should be open. Otherwise take the left path to the normal exit, wading through obstacles. Watch out for enemies behind vines as you make your way to the exit.

You can take the teleporter at the far end of the northern hallway (if it is open) for an aside which eventually gives you a plasma gun. Be careful of the nukage and barrels as you go through here if you want it.

This map has a total of four secret areas. The secret exit to E2M9 is also one of these four secrets but access to it isn't available until all the other three secrets have been found beforehand AND a certain region/linedef inside these secret areas has been crossed. One of these three secrets (the one with the Berserk and nearby the raising stairs) will become completely inaccessible if not found before entering a nearby door (in which case the only solution to find it would be to restart the map). After all three conditions are met, the secret exit to E2M9 becomes automatically accessible near the non-secret exit.

* The vertex count without the effect of node building is 1657.