E2M5: Deimos Observatory is the fifth level of The Classic Episode. It was designed by Jan Van der Veken and uses the music track "Suspense".

This level contains a secret exit leading to E2M9: Dissension. 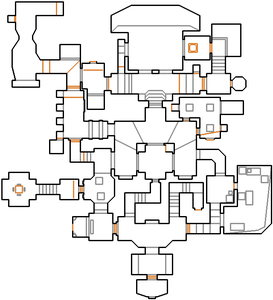 Map of Deimos Observatory
Letters in italics refer to marked spots on the map. Sector, thing, and linedef numbers in boldface are secrets which count toward the end-of-level tally.

Enter the door, go straight and enter the eastern alcove with blue lamps. In the dead end, you will encounter a spectre. There is a switch that unlocks the door inside the opposite alcove. Also, several spectres will teleport in. Now leave this alcove and enter the western one. Enter a small room with three windows and many shotgun guys to kill. Press the green button to unlock the door. You cannot jump off through the windows as they are too narrow. So, get back and out off the alcove. Kill new monsters and go through the eastern door. By the cargo room go through the tunnel. Use that open door. East open another one and head left. Enter a small room and get the red keycard. Get back through the door. The first door is closed, so use the western door. Inside, press the switch to open that first door. Go back to that open door.

In the grey room head west towards the room with several nukage pits. Open the green door and use the lift. Go around the corner towards the yellow key alcove. Once you take it, a trap will open nearby. Also, the chaingun closet will do. Leave the place by reusing the lift.

Across the room with nukage pits, open the UAC door indicated by red bars. Open the yellow exit door. Be careful when you do, as the imps will instantly teleport behind you. Go upstairs and enter the teleporter.

To get access to this, you have to walk on the staircase behind the northern red door. This will raise up a platform to step on. Go south to the second door with red bars. Step on this platform and jump into the fire wall. Press the button for the secret level.

This does not count as secret in the intermission screen.

The data was last verified in its entirety on December 4, 2021.

The level was originally released as a standalone WAD titled Doom Classic 3: Deimos Observatory, uploaded to the idgames archive in August 1998.