E2M5: Hazard Base is the fifth map of Cleimos. It was designed by Rand and Steven Phares.

It was adapted into MAP08 of Cleimos 2. 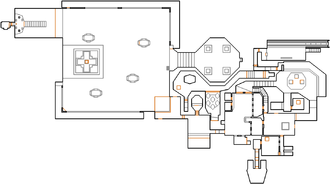 Secret exit: Pressing the switch on the eastern pillar in the aforementioned nukage room reveals many lost souls. There is a path leading west from their area, through three doors, to a switch which takes you to the secret level.