E2M5: Mutilated Corpses is the fifth map of Slaughter Until Death. It was designed by Denis Möller, then known as Panza, and includes "The Imp's Song" as a replacement music track.

This level contains a secret exit to E2M9: Arena of Punishment. 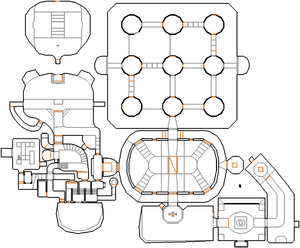 Map of Mutilated Corpses
Letters in italics refer to marked spots on the map. Sector, thing, and linedef numbers in boldface are secrets which count toward the end-of-level tally.

Secret exit: Go up the lift to the west of the blue doors, turn left and go through the door. Shoot the wall on the left, press the switch that is revealed, and run down the stairs. Go into the opened passage before it closes (it can be opened repeatedly) and through the teleporter. The secret exit switch is immediately ahead.

* The vertex count without the effect of node building is 1468.