E2M5: Necropolis is the fifth map of episode 2 of Heretic Treasure Chest. It was designed by Stephen Clark (The Ultimate DooMer) and uses the music track "Sinister" from Doom, created by Robert Prince. 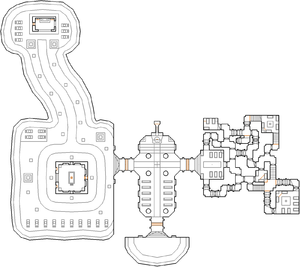 Map of Necropolis
Letters in italics refer to marked spots on the map. Sector, thing, and linedef numbers in boldface are secrets which count toward the end-of-level tally.

Collect the Ethereal Crossbow, Phoenix Rod and Bag of Holding in the starting area then open the gate in front of you to enter the cathedral - there are fire gargoyles by the pews and weredragons and an iron lich near the altar. Take the Silver Shield in the middle of the cathedral then open the east door to find a crypt with one or more ophidians, which leads to a maze of tunnels. Go through the east archway then head south (past a Silver Shield), east, south, go down a staircase to one or more ophidians then head south down a passage leading to a room with (depending on skill level) four weredragons, ophidians or iron liches. Clear the room and collect the blue key sitting in the north-west corner, but watch out for undead warrior ghosts rising from the tombs as you approach the key.

Go back to the stairs then head up the north staircase and keep going north until you reach a second room with (depending on skill level) four undead warriors, weredragons or ophidians guarding the yellow key. Pick it up and dodge the undead warrior ghosts that rise from the tombs, then return to the cathedral where a maulotaur has teleported in. Kill or avoid it then go through the west door to a graveyard around a large bronze building, guarded by sabreclaws and nitrogolems. Follow the path north until you reach a Hellstaff in front of a small structure containing ophidians; use the door on the west side to enter the structure, press the east switch (the west switch is not required) then go back to the west side of the bronze building to press another switch that has been revealed, which will open the gate leading into the building. Go inside the building, watching out for disciples of D'Sparil that teleport in, then press the switch in the east wall. The door will close, and a maulotaur will rise from the tomb in the middle of the room along with an Enchanted Shield and a Mystic Urn; slay the maulotaur then climb the steps to the green key.

Taking the green key will re-open the door so you can leave the bronze building. Go back inside the cathedral, where another maulotaur has teleported in, and look behind the altar to find Gauntlets of the Necromancer and a Tome of Power along with a switch. Press the switch to lower the back wall of the red crucifix and reveal three colored bars, open the bars using the keys you have collected then step on the teleporter behind them to finish the level.

Search the room in the north-west corner of the maze to find a Tome of Power, a Morph Ovum, an Enchanted Shield and a Mystic Urn (the last item does not appear on easy skill levels). Undead warrior ghosts will rise from the tombs in the chamber when you take the shield/urn.

The room north-west of the blue key chamber contains a Dragon Claw and three Energy Orbs; picking up the weapon will cause Chaos Devices to rise from the tombs on either side, but they cannot be reached without an iron lich's whirlwind.

In the structure in the north-west corner of the level, press the west switch to reveal another switch on the west side of the bronze building and cause several undead warrior ghosts to teleport in. Press the switch revealed by the bronze building to open two alcoves inside it, which hold a Tome of Power and two Greater Runes.

When a deathmatch game starts, players will cross a walkover line that raises a barrier in front of the cathedral entrance. This stops anyone reaching the multiplayer-only weapons in front of that door, which are presumably intended for cooperative play.

In deathmatch, all players will spawn inside identical alcoves that each contain an Ethereal Crossbow and a teleporter to a different part of the level; players will not know where they will appear until the teleporter is used.

* The vertex count without the effect of node building is 3750.