E2M5: Tactical Command is the fifth map in the Parallel World episode of ConC.E.R.Ned. It was designed by Matt Powell (cannonball) and uses the music track "Reason for Nothing," originally composed by Mark Klem for Requiem. 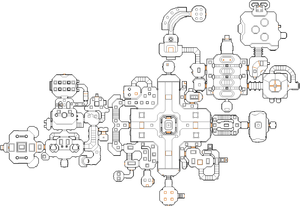 Map of Tactical Command
Letters in italics refer to marked spots on the map. Sector, thing, and linedef numbers in boldface are secrets which count toward the end-of-level tally.

Open the door to find a shotgun being guarded by two imps and zombiemen (or shotgun guys on Hurt Me Plenty (HMP) skill level or higher), then open the next door behind the fountain and fight your way to two staircases that lead up to a large cross-shaped bridge with a gray brick building in the center - the yellow keycard is sitting on a pole inside this building.

Head across the west bridge and open the door at the other end to reach a T-junction then go up the right-hand staircase, following the path past some spectres and imps until you reach the top floor where one or two cacodemons are guarding a skull switch. Press the switch to lower a teleporter behind you and enter it to reach a passage with some shotgun guys, then open the door ahead and to your left to confront some imps who are guarding another switch; watch out for one or two barons of Hell being released from an alcove behind you as you approach the switch. After flipping the switch, retrace your steps to the building in the middle of the cross bridge - fighting your way past cacodemons, shotgun guys and demons on the way - to collect the yellow key.

There are two sky portals either side of the yellow key - enter the white portal to the north and kill the zombies and imps ahead, then go north-east or north-west to some gray steps that lead up to a nukage pool guarded by more of the same enemies as well as demons and spectres. Head west into a small chamber to collect armor and a radiation shielding suit then go into the nukage and go north until you drop down a hole to a room containing cacodemons, spectres and shotgun guys guarding a rocket launcher. Flip the switch on the north wall to open a door to the east, pass through it and walk past two imps to reach a lift with zombies on it. Ride the lift up and press the button on your left to open the door, walk through it to return to the upper nukage area then head south and east up a set of steps to a junction with three exits. Walk east up some gray steps and look behind the computer block at the top to find the blue keycard.

With the blue key, kill the shotgun guys that are released behind you then go back to the entrance room where more enemies have appeared. Open the west door (requiring the blue key) and kill the demons that approach then walk towards the computer block in the center of the room, which will lower to reveal two to six barons. Press the button by the west wall to lower it, revealing two imps guarding a fire portal that you can step into to return to the yellow key building.

Step into the red portal to the south and kill an imp in front of you, then walk past it to enter a large marble hall guarded by shotgun guys along with imps on wooden ledges. Turn left and use the metal lift in front of you to get up to the west ledge, then go through the north door and follow some stone steps down to a white ledge which overlooks a pool of damaging blood. Follow the ledge round to collect a radiation suit then drop down to the blood pool and follow it north to a flesh chamber where a baron and cacodemon (or two barons on HMP or higher) are guarding a berserk pack and an eye switch; watch out for some spectres that are released behind you as well. After pressing the eye switch, retrace your steps to the marble hall and go to the north side where a pole holding the red skull key has lowered.

Taking the red key will allow a spiderdemon and some barons to teleport in to the hall - kill or avoid them, then use the metal lift in the south-east corner to get on the other wooden ledge and open the north door to confront some spectres and barons guarding a lava trench. Head north up some steps to a red rock cavern and kill the imps on the platforms ahead, then run across these platforms to reach the other side of the cave where one or two barons are guarding a gargoyle switch between a rocket launcher and plasma gun. Press the switch then head back across the platforms to the lava trench, where a bridge has risen allowing you to reach another gargoyle switch on the other side. After pressing this switch, return to the marble hall and go to the north side to find that some skull bars in front of a fire portal have lowered, letting you return to the yellow key building.

With all three keys, head across the south side of the cross bridge and press all three of the buttons on the other side to open the green door, but arm yourself as a cyberdemon is waiting behind them along with two to four barons that will teleport behind you. Push past the cyberdemon and press the blue skull switch inside the exit room to finish the level and go on to E2M6: Haunted Cellars.

Inside the exit room are four silver barriers, which can be opened by finding four switches throughout the level that are marked I, II, III and IV. They can be flipped in any order.

After flipping all four switches, return to the exit room and press a button that was hidden behind the silver barriers, then go to the north side of the cross bridge where some metal bars have opened. Step on the Plutonia-themed teleporter behind the bars to go to E2M9: Blackout.

Next to the switch marked I (see the "Secret exit" section above) is a teleporter leading to the south-east section of the cross bridge area. If you teleport to this area, go forward until you see a door on your left and pass through it, then head south-east to some steps that you can follow up to a button. Pressing the button will open two monster closets behind you containing demons and spectres, but it will also lower a teleporter on the floor below leading back to the south-west area where two columns holding a plasma gun and an energy cell pack have lowered.

Next to the pole holding the red key is a second pole with a BFG9000 on it. Ride the lift in the south-east corner of the marble hall up and go through the door closest to you to enter a square cavern, then go through a doorway to the north and head up the stairs to a gargoyle switch; pressing it will raise four bridges from the lava pit in the center of the cavern allowing you to reach a button in the center. Pressing this button will cause some imps to teleport in as well as opening two closets containing barons guarding a supercharge, and will also lower the pole holding the BFG9000 back in the marble hall. Watch out for a cyberdemon teleporting in when you collect the weapon.

* The vertex count without the effect of node building is 4546.